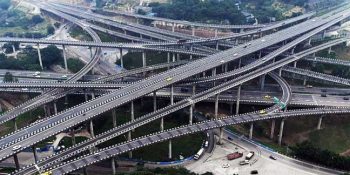 CHONGQING, China: Five suspended levels and cars going in all directions – a new highway interchange is driving motorists to tears, as they find themselves lost in a concrete maze resembling a plate of spaghetti.

After eight years of construction, the Huangjuewan interchange was completed last week on the outskirts of Chongqing, a sprawling metropolis in southwest China.

The structure balances five layers of traffic with the highest 37 metres above ground. No less than 15 ramps have been built to allow vehicles to move from one level to another, in eight directions, according to the municipality’s website.

An official on Chongqing’s urban and rural construction committee told Xinhua news agency that the complex design was necessary to link the city’s core, airport, and expressway, with each ramp leading to a different zone.

This navigational nightmare has set the Internet ablaze.

“If you miss a ramp, you will reach Chongqing one day later,” warned one user on the social network Weibo.

“My GPS told me: go where you want and leave me alone!”, a commenter joked, while another christened the city “Chongqing, the city that you’ll never leave.”

One driver was more reassuring: “Huangjuewan, a legendary bridge in eight directions and five stories: I took it without a GPS and without getting lost!”
Read more at http://www.channelnewsasia.com/news/asiapacific/drivers-bewildered-by-twisting-chinese-interchange-8924498