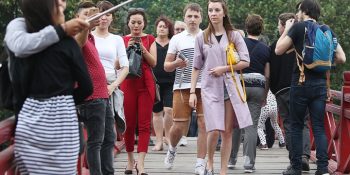 Insiders are unable to push for a wider visa program to include more nationalities.

The government has decided to extend its visa-waiver scheme for visitors from five European countries by another year, effectively rejecting the recent push by industry groups for a wider scope.

A post published on the government website on Monday afternoon said the visa waivers for citizens of France, Germany, Italy, Spain and the U.K. will stay on for another year, until June 30, 2018.

They will be allowed to stay in Vietnam for 15 days.

This decision would disappoint two top industry groups, the Vietnam Tourism Association and the Tourism Advisory Board. Over the past weeks, they had been urging the government to extend the scheme for five more years and to allow eligible passport holders to stay 30 days.

They also called for the inclusion of more foreign travelers, including those from key markets such as Australia, Canada and India.

Speculation of visa-free entry for Australian tourists, in particular, emerged years ago. But it was fueled in late 2015 when Australian visitors were declared the biggest spenders in Vietnam by the tourism authority.

When Hanoi launched a global campaign to promote its attractions in late spring, Phoebe Lee, an Australian travel writer, was picked as the official face.

It remains unclear if the government will choose to consider adding more countries to the visa waiver program over the course of the next year, before it expires.

Vietnam has been offering single-entry visa exemptions to citizens from Western European countries since mid-2015. Arrivals from the markets increased between 10-29 percent in the first five months, compared to the same period last year.

The country has set a target of welcoming 20 million foreign visitors in 2020 and develop tourism into a key economic sector, and the tourism association said that one way of achieving that goal is to provide visa waivers for important markets, the Vietnam News Agency reported.

The Vietnam Tourism Association has said that the e-visas introduced last February will not be able to replace visa exemptions.

In the Monday’s post, the government also said that e-visas are also an important issue as it affects a larger number of tourists. It said for many visitors, visa fees are not a real concern and that the goal should be to simplify visa procedures.

Official data released in early June showed that as of late May, 12,000 foreign visitors entered with e-visa including those from China, Japan and the U.S.

Vietnam is believed to have one of the toughest visa policies for tourists in Asia.