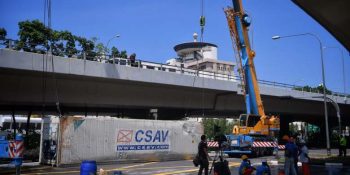 SINGAPORE – A stretch of Keppel Road has been closed after a trailer overturned on Wednesday (June 7) morning.

The Land Transport Authority said in a tweet at 10.40am that Keppel Road was closed after Kampong Bahru Road due to the accident.

A Singapore Civil Defence Force spokesman told The Straits Times it was alerted at about 6.50am and dispatched two fire engines, two fire bikes and an ambulance.

The driver was not trapped and he refused to be taken to hospital, the spokesman added.

When The Straits Times arrived at the scene at around 12.45pm, two cranes were being deployed to transfer the trailer’s container onto a truck.

The trailer had been removed earlier.

A video circulating on WhatsApp showed the trailer lying on its side on the left-most lane.

ST understands that the driver was turning right from Keppel Road towards the Marina Coastal Expressway when he oversteered, causing the trailer to overturn.

SBS Transit said in a tweet at 11.01am that seven bus services will skip the stretch due to the accident.