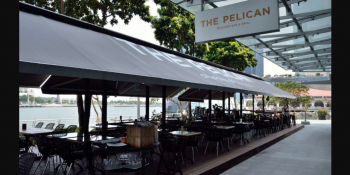 Shocking violence and danger of The Pelican. By Jessica Tan The Fullerton Area, steeped in local history is synonymous as a tourist attraction to view our marina and to sample some rather lovely cuisine. That image was abruptly interrupted yesterday after an incident involving a crazed assistant manager of the otherwise pleasant Pelican restaurant, Mr. Herwandi Junmari. The facts really are shocking and rather un Singaporean. An English entrepreneur of some seventeen years of residence in Singapore attended, The Pelican restaurant late yesterday afternoon with his local wife. Both whom are well known and friendly regulars, so too are the staff of the company they own. The visit was a prearranged business meeting. The company that the couple own had decided to trust The Pelican restaurant with the responsibility of entertaining their most important clients from China. However, the restaurant had failed to arrange the business-to- business invoicing agreement in time and the clients being on their way to the restaurant put the couple in a spot for what to do, and in a real show of trust the couple decided to leave their company credit card with the restaurant. They of course, had asked for a simple receipt for the card of which Mr. Herwandi Jumari agreed. The couple were asked to wait. Sat patiently it seemed that more than half an hour had passed and Mr. Jumari had not bothered to return. After finishing refreshments and growing impatient the staff were politely asked to attempt to locate Mr. Jumari. After a further period of time, Mr. Jumari arrived, asked the couple to sign a pay authorisation order for himself and turned his back on the couple and walked away. Surprised the couple called after Mr. Jumari and reminded him they had spent a considerable time waiting for him to issue them a receipt so he could safely retain the card. What happened next was a travesty of behavior from an assistant manager to a loyal and trusting regular customers. Mr. Jumari was witnessed to suddenly start shouting at the poor English gentleman. Pointing aggressively at the shocked visitors face reports his wife. “I didn’t know what happened. I was so scared. The other staff here are so nice. We had patiently sat for Mr. Jumari whom obviously wasn’t in the slightest bit bothered about leaving us waiting. I was desperate to get home after a long day and get the dinner started for our two children. My husband had simply expressed his surprise at being left for so long and then when this manager got what he wanted he simply walked away not caring about us. Then I heard this man screaming at my husband. Why would any person in a position of responsibility represent a business in such a crude manner to its guests? We are regulars and so are our staff. At one point when this crazed man had to be restrained by a number of staff and pushed back by them in order to stop him attacking my husband. I was genuinely scared for my safety”. Mr. Jumari’s reaction was such that the Police were called by the victimized couple. Not satisfied with insulting and threatening the couple, Mr. Jumari still not under control of himself by the time the coiple were leaving, had managed to side step the staff standing and lurching forward toward the couple further shouting, “get out and don’t come back”! Quite obviously, people otherwise enjoying the venue were seen to be leaving in a hurry.

Your Voice Asia would like to ask Mr. Herwandi Jumari, does he feel this level of behavior be appropriate for loyal regulars just attempting to make advance payments for its restaurants service? And in a hot spot tourist location, can we as Singaporeans tolerate such treatment at public venues? At time of going to press the couple, still upset had asked temporarily for their names not to be published while they consider their options. But they promised to come back to us here and we will follow this case closely of course update you the public. In the meantime, Your Voice Asia will be contacting the shareholders and the directors registered on ACRA to get their view of how one particular staff member behaves while managing their establishment? If you’ve had any experience of this venue please don’t hesitate to email me: investigation@yourvoice.asia