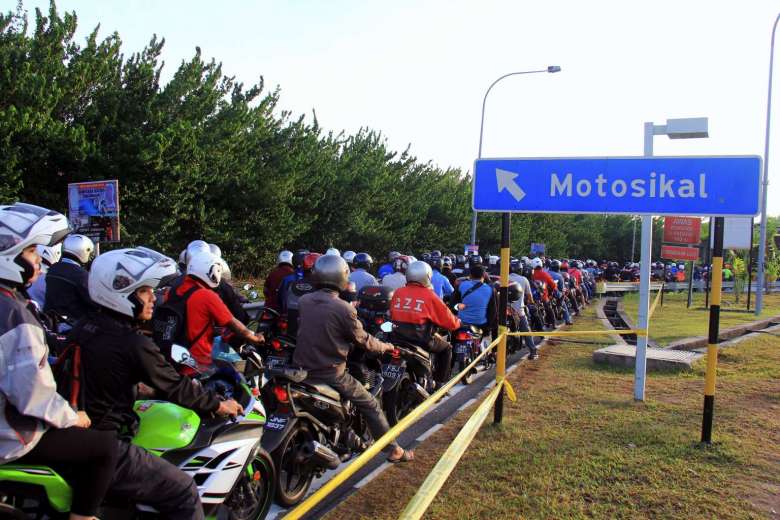 JOHOR BARU – Thousands of motorcyclists rushing to Singapore for work were stuck at the Johor Baru immigration checkpoint on Tuesday (Feb 21) after newly-implemented automated gantries malfunctioned for a second consecutive day.

The problem stems from a days-old automated gantry system called MBIKE, which was fully implemented on Feb 16.

MBIKE was introduced to help reduce congestion at entry points between Malaysia and Singapore by up to 50 per cent. It uses a radio frequency identification device sticker attached to the holder’s passport and requires the passport holder to place his thumb on the reader before the gantry gate opens.

But some of the gantries have broken down, causing a huge bottleneck and forcing the authorities to channel motorcyclists through normal manned gantries, reported Sin Chew.

The same problem had on Monday caused a three-hour jam starting at 6am, and left many motorcyclists fuming as they were late for work.

One of the motorcyclists, Muhammad Azman Mohd Khaled, 42, told The Star he decided to turn back and return home instead.

“There were long lines of motorcyclists and the traffic flow did not improve for a few hours, which is why I decided to take a day off,” he said.

Another motorcyclist, Amy Chang, 38, who works as a restaurant manager in Singapore, said she had no choice but to brave the congestion.

“The MBIKE system should improve the traffic flow but instead it’s making it worse,” she said according to The Star.

“The average time for going through a MBIKE counter is only one minute, but there are some irresponsible motorcyclists who do not have the patience and just barge through the inspection lane without providing their passports, which is a serious offence,” he was quoted by The Star as saying.

Rohaizi added that there were also motorcyclists who did not register with the system but accessed the special lanes meant for MBIKE users.

He defended the MBIKE system, stressing that it was put in place to ensure that motorcyclists would be properly checked by the department before entering Singapore.

There are 50 MBIKE counters and 12 other counters for manual checks at the CIQ.

Rohaizi said 38 motorcyclists had been detained under Section 2 (2) of the Passport Act for going through the gantries without providing their passports to the Immigration Department.

He added that the department would be working closely with the traffic police over the congestion issue and urged those entering Singapore through the Causeway and Second Link to be patient.