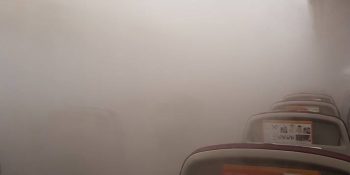 On a trip from Phnon Penn to Bangkok Suvarnabhumi Airport, passangers where boarded onto the 4pm plane. All was well untill 5 minutes after we sit down the plane started to fill up with smoke. No one on the plane was told for 10 minutes what was wrong.

Then a Air Hostess said the aircon is not working and gas is coming into the plane.

The cabin was filled with unconditioned air from the outside, warm and nearly saturated in water vapor, and the dew point see close to the ambient temperature. The conditioning system while injected cold air in the cabin decreased the temperature below the dew point. Invisible water vapor (gas) was converted into visible water droplets (liquid).

So if it was only water vapor why did they make us leave the plane to fix the problem. Since then im Coughing and I have a very Sore throat.

Not one person new or said sorry for the problem. ive wrote to the airport to complain, we will keep you informed.