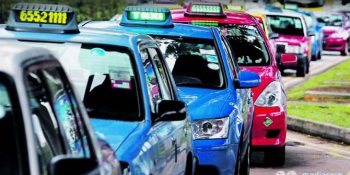 SINGAPORE: Taxi fares in Singapore are the 20th cheapest in the world, according to an index compiled by online used car dealer Carspring, which is based in the United Kingdom.

The 2017 Taxi Price Index surveyed 80 of the “most visited cities” around the world including New York, London, Hong Kong and Bangkok.

In deciding its ranking, Carspring said it considered the cost of hailing a taxi, the cost per kilometre, the cost of waiting time, and the typical fare from the airport to the city centre. Each category was normalised, and the final rank is based on the price of a 3km ride within each city.

According to Carspring, Cairo has the world’s cheapest taxi fares – a typical 3km ride would cost US$0.55 (S$0.75). In contrast, a taxi ride of the same distance in Zurich would set a passenger back by US$25.25, the costliest among the cities surveyed.

A 3km taxi ride in Singapore would cost US$4.01, according to the index.

Going by the cost of a ride from the airport to the city centre, Cairo (US$4.20) still came up tops. The same ride in Tokyo was the most expensive among all 80 cities, typically costing around US$189.91, according to the index. Singapore came in 31 using this benchmark, with a fare of US$27.31.

As to how much it costs to simply get into a cab, it is the most expensive to do so in Zurich, which has an initial hire cost of US$8.30. Tunis is the cheapest, with taxis charging US$0.19 at the start of a journey. Singapore is the 33rd cheapest based on this, with passengers paying about US$2.57 when they first board a taxi.

The index also found that ride-hailing company Uber operates in 63 of the 80 cities it focused on.

To compile the list, Carspring said it gathered data from the official website of each city. It also included details such as the most popular car model with taxi drivers from the cities it surveyed (it’s the Hyundai i40 in Singapore).