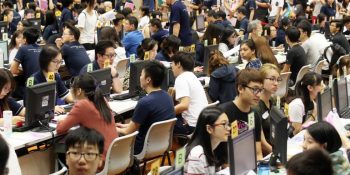 A Hong Kong committee looking at an application for an education funding boost of HK$3.6 billion was suspended twice on Wednesday morning, with the city’s opposition camp warning that it could no longer be business as usual in the legislature following the disqualification of four lawmaker

Eight items in total – which include the funding applications for education as well as hospital redevelopment, and a pay rise for civil servants – were awaiting the approval of lawmakers.

The meeting on Wednesday would be the last for the finance committee before the Legislative Council’s summer recess.

Before the meeting, the pro-democracy camp warned that it would focus on only the education funding request – the first item on the agenda – to protest against what it called “a declaration of war” by the government.

Relations between the bloc and the city’s administration have turned sour after a court last week ruled in favour of the government and disqualified four pan-democratic lawmakers: Nathan Law Kwun-chung, Lau Siu-lai, “Long Hair” Leung Kwok-hung and Edward Yiu Chung-yim.

Chan eventually ordered Cheung out of the chamber after the Labour Party lawmaker refused to oblige his request to sit down following the break.

“I am only standing here and holding the placards [featuring the disqualified lawmakers]. I have already been very restrained compared with what the government had done … which amounted to a coup d’etat,” Cheung complained.

“Why am I banned from standing which would not disrupt the meeting at all?”

Cheung led the camp in chanting “shame on the disqualification” as he was escorted out by security guards.

A war of words also erupted when pan-democrats complained about two pro-establishment lawmakers – including Michael Luk Chung-hung – taking pictures with their phones during the chaos, a move not allowed in the meeting.

The HK$3.6 billion funding boost for the education sector was an election pledge of Chief Executive Carrie Lam Cheng Yuet-ngor. The sweeteners being offered include a HK$30,000 annual subsidy for Hong Kong students applying for a self-financing degree programme at non-government-funded tertiary institutions.

Democrat lawmaker James To Kun-sun, together with a number of other pan-democrats, was unhappy that the proposed subsidies would cover only these institutions and argued they should cover the self-financing programmes offered by the city’s eight publicly funded universities as well.

Education minister Kevin Yeung Yun-hung declined to amend the package but promised to consider the suggestion in future evaluations.

Beijing-friendly lawmaker Kwok Wai-keung, of the Federation of Trade Unions, expressed concerns that the funding request for the pay rise for public servants would not be approved before the legislature’s summer recess.

The finance committee would hold two more sessions, which are set to last two hours each, on Wednesday afternoon.