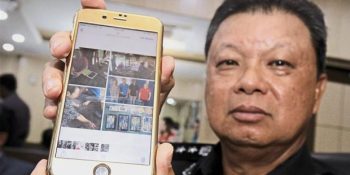 GEORGE TOWN: Now that illegal gambling dens cannot ‘pretend to be family entertainment outlets’ anymore, operators are changing strategies but the police are still on to them.

“Some of the operators are now visiting food courts and gambling sheds at forest fringes. They hand out tablets with WiFi connections to gamblers, who load credit into their accounts and get special passwords to start betting.

“Some of the gamblers just log in with their own smart phones,” said Penang police chief Comm Datuk Wira Chuah Ghee Lye.

He said in a press conference at the state police headquarters yesterday that the new tactic was discovered after a raiding team seized 19 Android tablets from an operator.

In an exclusive report in June, The Star exposed licensed family theme parks and entertainment outlets in Penang where players of simulator games like fishing and golfing were actually betting on the game scores.

They operated into the wee hours, frequented mostly by retirees and middle-aged housewives.

Many of these outlets were in densely populated residential areas such as Bandar Baru Air Itam, and Seberang Jaya on the mainland.

Police have since declared war on the outlets, and Comm Chuah said that since January, they arrested 268 operators of gambling premises and 384 players in 215 successful raids.

He said police instructed Tenaga Nasional Berhad to cut the power supply at 25 illegal gambling dens under Section 21(A) of the Common Gaming Houses Act 1953 and issued letters to Penang Island City Council to revoke 62 licences of such entertainment outlets.

“Such premises have stopped operating since we began the raids and we believe we have eradicated almost 99% of them. We will continue until this is completely wiped out.”

On an unrelated case, Comm Chuah said investigations revealed that three detainees allegedly paid RM6,000 to eight policemen to escort them out of detention to meet family and friends.

It was reported that the one of the detainees, Anuar Ayat, slipped away in Sungai Nibong Besar when he was brought out.

The eight policemen have since been suspended and Comm Chuah said the hunt for Anuar was still ongoing.