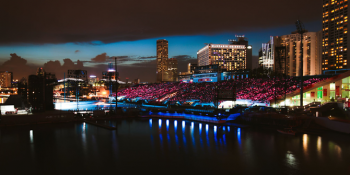 SINGAPORE: Three hundred unmanned drones will take to the skies at the National Day Parade (NDP) for the first time in the parade’s history, organisers said on Thursday (Jul 6).
It will be Southeast Asia’s biggest display of such drones, they said, adding that the performance aims to “inspire Singaporeans to imagine the immense opportunities that (the) future brings”.

Colonel Tan Tiong Keat, chairman of the Show and Dynamic Defence Display committee, said that the parade was “modelled after a typical birthday celebration, where families and friends gather to reflect, to celebrate our present and to inspire and look forward to the future”.

NDP 2017 also aims to engage audience through elements such as clap choreography and a joint “yam seng” toast. For instance, organisers said, mosquito puppets will dance their way through the audience to the stage in Act 1, and the audience will be invited to clap together to symbolise a collective effort in eliminating mosquitoes.

In line with its #OneNationTogether theme, this year’s parade will feature more than 3,000 performers from all walks of life. The youngest performer is four-year-old Shaista Eman, who is the daughter of veteran NDP host Nurul Aini, while the oldest is 81-year-old electric guitarist Mary Ho.

There will be six acts in total, with each act representing different issues close to Singaporeans’ hearts. Five protagonists will bring the audience through the acts from start to finish.

Making his return this year is creative director Goh Boon Teck, who took part in the 2007 NDP when it was held at the Marina Bay Floating Platform for the first time.

Mr Goh said that one major change he made is to the duration of each performance. “I have had more time to reflect on what I could have made better. One change I made was to make the scenes shorter, so that I can grab hold of viewers’ attention better,” he said.

For the first time, the NDP stage will also feature an aerial system to lift performers and props 20 metres above the ground, as well as a revolving stage and two movable LED screens.