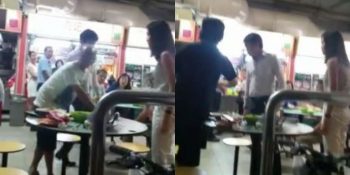 SINGAPORE – An elderly man who was abused by a couple at a Toa Payoh hawker centre in a video that has gone viral was calm and polite, said an eyewitness.

A video that shows a young man shoving an elderly man from behind at Toa Payoh Lorong 8 Market & Food Centre was shared extensively on Facebook since it was posted around midnight on Sunday.

A woman in white, his companion, was earlier seen shouting at the elderly man, apparently in a dispute over sharing the table.

Many Facebook users were horrified at the young couple’s behaviour.

Ms Janice Lim, who was having dinner at the hawker centre on Friday (April 21), said she was sitting at a nearby table when the incident happened at around 8.45pm.
It was very crowded, and the table in dispute was the only available one in the area at the time, she said.

She looked over when she heard a woman shouting, Ms Lim, 50, told The Straits Times on Sunday (April 23).

The elderly man, who was holding a tray of food, was asking the woman how many people were sitting at the table.

The woman’s irritated reply was “can’t you see it’s reserved”, Ms Lim said, adding that there was a small foldable umbrella on the table, which was filled with dishes and leftover food from previous patrons.

The elderly man said he could not, and repeated a few times that he just needed one seat, but did not raise his voice, she said.

He also asked the woman what she meant by “reserve”, as the hawker centre was a public place, Ms Lim recounted.

The woman continued to say loudly things like “you don’t understand the word reservation?”, and called him a “bl**dy old man” and “f******* old man”, according to Ms Lim.

The angry young woman then called her companion, and told him that the elderly man was trying to take their table.

Shortly after that, the young man came and shoved the old man from behind, as seen in the video posted on a few Facebook accounts, including The Local Society. That video has been viewed 1.3 million times as of 3pm on Sunday.

The elderly man nearly lost his balance from the shove, but managed to stay on his feet by holding onto the table.

The young man then asked him: “Why you disturb her?”

Ms Lim said that at this point a few people started to approach the couple and the elderly man, including herself.

A man in black, seen in the video, was the first to reach them. He was sitting at a table beside them, which had one seat left. He offered the elderly man the seat and he went to join them, Ms Lim said.

Later, Ms Lim also saw another patron tell the young man he should not have pushed the elderly man.

The young man then pushed the plates and bowls on the table onto the floor in anger, leaving a mess for the cleaners, Ms Lim said.

“This is the worst manifestation of our seat choping culture,” Ms Lim added.

On Sunday evening (Apr 23), in response to online rumour that the two young people worked at UOB, the bank posted two Facebook updates. The first post at about 8.30pm, which was shared more than 800 times, stated that the bank was looking into whether the two were members of the bank’s staff at the Toa Payoh branch.