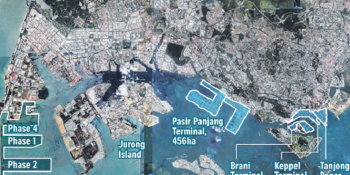 Works are in full swing at the future Tuas port, with reclamation ongoing for two out of four phases of the development and more than 3km of caisson already installed to form the wharf.

The caisson, which sits on a foundation on the seabed, is a 28m-high concrete watertight structure – about the height of a 10-storey Housing Board block. Using caissons to build the wharf structure is faster than traditional methods like piling.

In all, 8.6km of caisson will have to be constructed under Phase 1 of the Tuas port project, which aims to grow the Singapore port, amid competition from other regional and global ports.

The new Tuas port – which will be twice the size of Ang Mo Kio town – will be opened progressively from 2021. When fully completed by 2040, it will be able to handle up to 65 million twenty-foot equivalent units of cargo a year, more than double what the port handled last year.

Work on the port, which will eventually house current operations at Pasir Panjang, Tanjong Pagar, Keppel and Brani container terminals, is proceeding as planned despite the current industry downturn. Maritime and Port Authority of Singapore (MPA) chief executive Andrew Tan told The Straits Times: “As a small and open country, any significant changes in the global economy would affect Singapore.”

Still, Singapore has maintained its position as a global port hub and an international maritime centre, despite the current slowdown.

He said: “PSA’s volumes are holding steady, vessel arrival tonnage has increased, more ships are being flagged under our registry and bunker volumes remain high.”

PSA’s volumes are holding steady, vessel arrival tonnage has increased, more ships are being flagged under our registry and bunker volumes remain high.

MR ANDREW TAN, chief executive of MPA, on Singapore maintaining its position as a global port hub despite the slowdown.

More than 20,000 maritime professionals, including high-level delegates from port authorities, industry leaders and maritime experts, are expected to attend the programmes throughout this week.

As part of the event, members of the public can take a virtual tour of the Port Operations Control Centre which helps to secure Singapore’s waters, and also watch a drone that can analyse the chemical composition of hazardous smoke.

At the opening yesterday, Senior Minister of State for Transport Josephine Teo said it is critical for the industry to band together to face challenges. For example, to meet the sector’s long-term demand for talent, the Singapore Maritime Foundation is working with government agencies and private companies to offer incentives such as scholarships.

And as part of the move to Tuas, MPA is studying new technologies and automation, including the use of robotics and drones that will not only make port operations more effective and efficient, but also more attractive for those considering joining the industry.