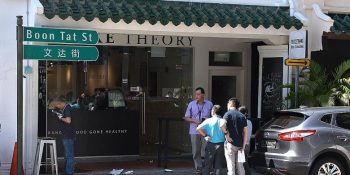 When a customer told him that a man was bleeding outside his restaurant, Mr Eldad Tan, 28, rushed out to help the victim.

He was shocked when an elderly man told him not to help the victim and to let him die.

The 38-year-old victim later died from stab wounds sustained in the attack in Telok Ayer around 1.20pm yesterday.

A police spokesman said he was taken unconscious to Singapore General Hospital (SGH), where he died an hour later.

A 69-year-old suspect has been arrested.

The New Paper understands the victim is Mr Spencer Tuppani, an investment director.

He was stabbed outside a coffee shop, Eden Garden Cafe, and ran to A Poke Theory restaurant at 27, Boon Tat Street, about 70m away.

Mr Tan, who manages the eatery, told TNP that a customer sitting outside ran in to tell him about a man bleeding outside.

He ran out with a colleague and saw a man lying face down in a pool of blood. He then called 995 for an ambulance.

“I was so focused on the man on the floor I did not notice an older man holding a knife, standing over him. He said, ‘Don’t help him, he’s my son-in-law. Let him die. I’m old already, I’m not afraid of going to jail.'”

Mr Tan said he went back into the restaurant and locked the door to protect his 20 customers. He evacuated them from the rear of the restaurant.

He added that the older man left the bloodstained knife on a table while Mr Tan’s colleague called the police from the restaurant next door.

A customer, Miss Barbara Latimer, 26, a freelance emcee, told TNP that the older man was calm as he used his mobile phone.

Mr Tan said: “I heard he had chased the victim here from the coffee shop down the road.”

Engineer Jeffrey Lim, 55, said when he walked by around 1.30pm, a woman in her 30s was crying near the spot.

The police said the suspect will be charged today with murder, which carries the death penalty.