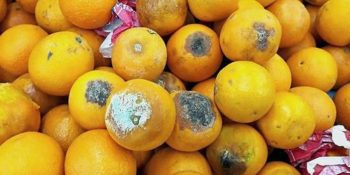 ALOR SETAR – Fancy dining healthy with fruits and vegetables? If so, look carefully before you pay for these items at the cash register.

A survey by The Star at various hypermarkets and supermarkets here revealed that rotten fruits and vegetables were being offered for sale at some of the outlets.

Consumers were irate that these items were not removed at once.

“Besides being a health risk if consumed, the rotten fruit and vegetables are an eyesore,” said restaurant owner Romzy Ahmad.

Another restaurant owner, who only wanted to be known as Kak Nor, said she was frustrated with what was going on.

“I once informed the staff of a hypermarket about rotten fruits and vegetables being sold there but I saw them again on another trip to the store.

“Sometimes we see rotten fruits and vegetables sold at a slightly lower price but most of the time, the items have turned bad. So much that flies linger around!”

When contacted, a hypermarket manager said it was standard operating procedure to remove all rotten and expired items from the shelves.

He said stores which did not observe this were “not being responsible”.

“Consuming such items may cause food poisoning and other harm,” he added.

Kedah Domestic Trade, Cooperatives and Consumerism Department director Mohamad Fitri Hassan said his men were unable to act on cases of the sale of rotten fruits and vegetables as this was under the purview of the Health Department.

“It is the same as the case of traders selling expired food. That too is under the purview of the Health Department,” he said, explaining that the department was unable to act in such cases although it involved consumers.

In Kota Baru, there are reports of rotting vegetables and fruits being sold at half price in hypermarkets here.

A Health Services Department official said they could take action under the Food Act 1983 and Food Regulations 1985 if the food sold were of sub-standard quality.

“However, we have never received any complaint about rotten vegetables and fruits, as it comes under the purview of the Agriculture Department.

“But, when we come across rotten fruits and vegetables sold in the markets, we can immediately confiscate these,” she said.

She also said the “see, smell, taste” campaign, launched by the Health Ministry seve­ral years ago, seemed to have “borne fruit” as it had raised awareness on food quality.