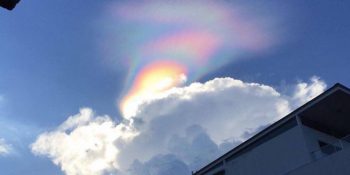 Singapore was treated to a rare weather phenomenon as an apparent “fire rainbow” lit up the sky.

Weather watchers on the island state in south-east Asia were treated to the multi-coloured glow yesterday.

The stunning scene may also have been cloud iridescence. Both phenomena can be caused by the refraction of light through ice crystals, or in the case of iridescence, by water droplets.

For iridescence to occur clouds must be thin so the sun’s rays encounter very little water.

The technical name for a fire rainbow is a “circumhorizontal arc”.

The light show persisted for about 15 minutes and could reportedly be seen across the island.

Childcare worker Fazidah Mokhtar told the BBC: “It started as a small orange circle and then grew bigger and bigger till all the colours came out… It lasted for about 15 minutes and it slowly went off.”