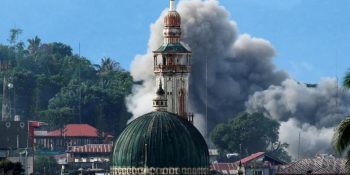 Singapore is a potential target for the terror network fighting Philippine forces in Marawi as it may be prepping Muslim militants for similar attacks in the region, said a report yesterday.

A study by the Jakarta-based Institute for Policy Analysis of Conflict (Ipac) shows the Marawi operations had received direct funding from the Islamic State in Iraq and Syria (ISIS), with a chain of command running from Syria through the Philippines to Indonesia and beyond.

The network is run by Dr Mahmud Ahmad, a Malaysian former university lecturer, and Bahrumsyah, an Indonesian who heads Katibah Nusantara, an ISIS unit in Syria comprising mostly of South-east Asians.

Ipac said the Marawi conflict “has lifted the prestige of Philippine fighters in the eyes of ISIS central” and “inspired young extremists from around the region to want to join”.

This could lead to a “higher risk of violent attacks” in other Philippine cities, and Indonesia and Malaysia, it warned.

The conflict has also led to “greater cooperation among South-east Asian extremists, and new leadership for pro-ISIS cells in Indonesia and Malaysia from among returning fighters from Marawi”, the report added.

Since hundreds of militants from two Muslim groups seized large parts of Marawi in May, they have fought the Philippine military to a stalemate using urban warfare tactics learnt from veteran fighters who returned from the Middle East.

“Indonesia and Malaysia will face new threats in the form of returning fighters from Mindanao, and the Philippines will have a host of smaller dispersed cells with the capacity for both violence and indoctrination.”

Referring to the leaders of these countries as “kafirs” (non-believers), the broadcast, seemingly at Dr Mahmud and Bahrumsyah’s behest, added: “It is our duty to stand up against them and to bring syariah in place of the laws that these territories have.”

Last month, it was reported that Singapore had been identified by ISIS supporters on social media as part of its “East Asia Wilayah”, or state.

Defence Minister Ng Eng Hen said last month that the Marawi crisis indicated that terrorism is endemic in this region.

And the Ministry of Home Affairs (MHA) also warned that Singapore’s terrorism threat has been at its highest in recent years.

Security expert Kumar Ramakrishna said there was no need to be unduly alarmed, but Singaporeans should be more alert and pay greater attention to campaigns such as SGSecure.

“The report confirms what some of us analysts have been warning for a while – that ISIS Central is very serious about establishing a foothold in South-east Asia,” said the head of policy studies at the S. Rajaratnam School of International Studies.

“It confirms that the threat to the region including Singapore is very real.”

Replying to queries by The New Paper, an MHA spokesman said that Singapore has been closely watching developments in Marawi as they can have “serious ramifications for Singapore’s safety and security”.