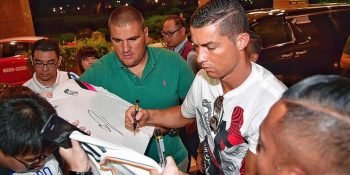 Clad in a white Real Madrid jersey, Jonathan Cheong waited for more than two hours at the Thomson Medical Centre yesterday morning, hoping to catch Cristiano Ronaldo and secure an autograph on his top.

The 16-year-old did manage to catch a glimpse of the 32-year-old superstar among a crowd of around 100 fans, but failed to get the Real Madrid and Portugal captain’s signature as Ronaldo left hurriedly after visiting local billionaire Peter Lim’s daughter Kim, who gave birth to a boy days ago.

Jonathan did not give up and his persistence paid off.

Former Manchester United star Ronaldo arrived at Great World City in a black SUV just after 8pm for dinner with Lim and the Crown Prince of Johor, Tunku Ismail Sultan Ibrahim, and was immediately approached by a group of about 15 fans, including Jonathan, brandishing jerseys and marker pens.

The four-time Fifa Ballon d’Or winner was momentarily taken aback, before obliging most of the group by signing their jerseys.

Jonathan, a Real fan of four years, said: “I am ecstatic… I am going to frame the jersey, hang it on my bedroom wall and gaze at it every day.”

The Chelsea fan said: “It is really an indescribable feeling. After a long day of waiting, I finally got it.

“I have followed him since his United days but I started to pay attention to him when he joined Real. He is really top class.”

In town for a day to sign an undisclosed endorsement deal, Ronaldo touched down at Changi Airport at about 9am and made his way to Thomson Medical Centre.

Hong Kong-based Mint Media, owned by businessman Lim, has been administering Ronaldo’s image rights since 2015, except those pertaining to his club.

A mix of fans and media were waiting for Ronaldo at the hospital and security staff had to make a way through for the star.

The media were told to wait at the main lobby for a possible interview session, but after 15 minutes were told that Ronaldo had left by another exit.

The footballer, who was left out of Real Madrid’s squad for the International Champions Cup in the US, left last night for more Mint Media engagements in China. – ADDITIONAL REPORTING BY MARIELLE DESCALSOTA