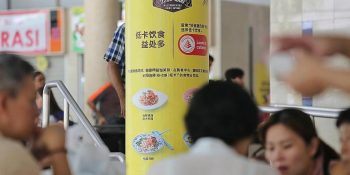 Health Promotion Board draws up list of shop-bought dishes under 500 calories.

Four in 10 hawker stalls will sell at least one healthier dish by 2019, if the Health Promotion Board’s (HPB) latest effort to get Singaporeans to choose healthy food pays off.

This will mean almost doubling the proportion of such stalls that currently offer healthier choices.

To help diners identify lower-calorie dishes, the HPB has drawn up a list of 63 dishes that tend to be under 500 calories. These include beef noodle soup, masala thosai and mee soto.

Dishes are checked to ensure they meet the calorie limit. If they do, the stall gets a label that marks the dish as a healthier option.

The move to identify healthier food in hawker centres is part of the Healthier Dining Programme, which first began in June 2014, with restaurants and foodcourts.

It comes as Singaporeans are getting heavier – an adult weighs 3kg more on average today than 15 years ago, an HPB study released last month found.

Eating out could be a source of extra calories.

Six in 10 Singaporeans eat out at least four times a week, according to the National Nutrition Survey in 2010.

About 11 per cent of the adults here are obese.

It is not the first time hawker food has been targeted in healthy eating schemes.

In April 2011, the Healthier Hawker Food Programme was rolled out to encourage hawkers to offer healthier versions of popular foods, such as char kway teow, by using healthy oil or less salt.

He said: “It was a very high-risk move for many of the hawkers, who had to change the recipes of dishes that had been developed over several decades.”

The scheme was later shelved.

This latest push, however, takes a different tack by giving people information to make better decisions about hawker food.

Some dishes cannot be modified to become healthier without compromising on taste, added Mr Chee, who was speaking to reporters at Bedok Interchange Hawker Centre, where two-thirds of the food and drink stalls already offer at least one healthier option.

Mr John Ng, 60, who was having lunch at there yesterday, said the labels could sway him to change his eating choices once in a while.

“I am not particular, but I am still conscious of what I am eating,” said Mr Ng, a managing director.