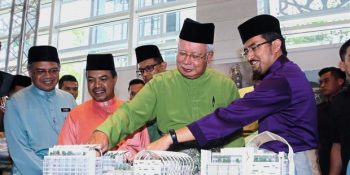 PUTRAJAYA: The country’s peace and progress show Malaysia is not a failed state as some parties have claimed.

Prime Minister Datuk Seri Najib Tun Razak said Malaysians have a lot to be proud of regarding the country’s achievements and development.

“The newly launched Mass Rapid Transit (MRT) system is just one of the many examples of progress,” he said, adding that Malaysians can now enjoy world-class transportation that is on a par with the best in the world.

These could not materialise if the country was in a shambles like how the Opposition tried to paint it to be, Najib said.

“Does the progress that we have achieved show the country is a failed state? Does this reflect a bankrupt administration? Is this a Malaysia that needs to be saved?” Najib said, referring to the criticisms piled against his administration.

Speaking at the launch of the Putrajaya Islamic Complex, Najib said the Government would conti­nue to bring prosperity and look after the well-being of its people in order for Malaysia to become a role model for others to emulate.

He said Malaysia practised “authentic Islam”, which was why Saudi Arabia wanted to build the King Salman Centre for Inter­national Peace here.

“King Salman could have chosen any other country to host the centre but I was told by one of his advisers that Malaysia was chosen because it is an exemplary country,” he added.

At an earlier function, the Prime Minister told Felda’s younger generation to embrace the pioneering spirit of their elders.

Having the same drive and determination like their forefathers could help them advance in life, Najib added.

He said instead of being bogged down by the “village mentality”, they should have an open mindset and accept changes and new ideas, so that they can be successful in life.

“There will be challenges along the way but knowledge and skills, coupled with good moral values, are what they need to become successful,” he said at a Hari Raya gathering hosted for the Felda community in the Klang Valley.

Najib said there were many children of Felda settlers who made it big, holding senior positions in the civil service or becoming professionals and prominent businessmen.

Their stories should inspire the young ones to also succeed in life, he added.