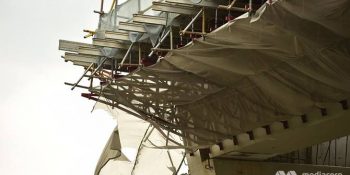 SINGAPORE: The design and construction process of an uncompleted viaduct near the Pan-Island Expressway (PIE) will be the focus of an investigation into why it collapsed in the early hours of Friday (Jul 14).

One worker was killed and 10 others injured after the structure on which they were standing collapsed.

“MOM officers from the Occupational Safety and Health Inspectorate have been onsite since this morning to conduct a thorough investigation which will focus on the design and construction process of the flyover,” Minister of State for Manpower Sam Tan said in a Facebook post on MOM’s page, after visiting the site on Friday.

Preliminary investigations indicated that corbels – brackets that help support beams – had given way.

BCA later clarified in a statement that it was specifically the support structure (girder) and platform (deck slab) for one portion of the viaduct that collapsed during concrete works by Or Kim Peow Contractors, the construction firm that was working on the project.

In separate statements on Friday, the Ministry of Manpower (MOM), Land Transport Authority (LTA) and Building and Construction Authority (BCA) said they had launched investigations into the cause of the accident.

In a statement on Friday, MWC said the workers who were caught in the accident are employees of three different companies that are sub-contractors at the work site.

It also identified the dead worker as 31-year-old Chen Yinchuan from China.

“We have reminded his employer of their statutory duty to see to the respectful handling and repatriation of the workers’ remains,” said MWC, adding that the company has “demonstrated good faith” in thinking about flying his next-of-kin to Singapore.

Apart from the worker who died, three others are from China, six are from Bangladesh and one from India. The affected workers are aged between 22 and 49 years, said MWC.

It also gave an update of their condition, saying that three workers required surgery.

“Aside from three workers who remain in surgery or close post-surgery care, all the workers have either been discharged or moved to normal wards for observation,” MWC said.“We are hopeful that the conditions of the three will stabilise soon.”

All the injured workers were taken to (CGH). The hospital told Channel NewsAsia that two of them were in the intensive care unit.

MWC said it has contacted all three sub-contractors and received word that they would bear the treatment costs for their workers and file work injury compensation claims on their behalf.

“We are heartened by the employers’ readiness to rally behind their workers in this difficult time and have conveyed our support should they encounter difficulties, or be unsure of or unable to discharge any of their legal responsibilities,” MWC said.