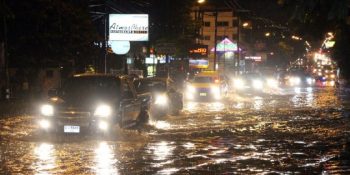 It is well and truly the rainy season now and last nights storm caused absolute chaos on the roads. Some of the worst affected areas included the Sukhumvit Road stretching from Central to South Pattaya, 3rd Road, and Khao Talo, where water levels reached up to 50cm in some places.

Pattaya’s drainage system, or lack of it, came under heavy fire and carried on it’s consistency, to put it nicely, from previous heavy downpours. Traffic build up was nothing short of a nightmare in some places, especially the Sukhumvit, as you can see from some of our pics.

No fewer than 20 cars were reportedly rescued from the main roads after breaking down, or getting stuck in waters too deep to move in. I dare say there were many more too.

Emergency services were on hand for most of the night, but did struggle getting round themselves with the traffic and water causing difficulties.

Reports suggest that we are through the worst of it, but i’m sure there will be more storms like this before this year’s rainy season is over.