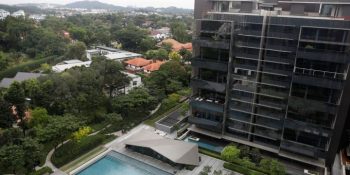 THE capital flight to greener pastures abroad from Singapore has slowed to a trickle, amid a turnaround in the property market at home.

Data compiled by Real Capital Analytics and Knight Frank Research shows that the number of outbound investment deals dwindled to 34 in the first half of 2017. The figure was 144 for last year, and 503 in 2015.

In 2015, there was an exodus of capital abroad from a poorly-performing domestic property market, as capital values of Singapore homes and commercial properties fell steadily in reaction to the government’s measures to cool the market.

Ian Loh, Knight Frank’s executive director and head of investment and capital markets, said at the launch of the property consultancy’s inaugural “Active Capital” report on Wednesday: “Two years ago, when Singapore was relatively quiet, locally listed players were rethinking what to do with the money, which was why they ventured offshore to look into recurring income assets.

“But since then, capital values in these markets have appreciated, and somehow, in many major cities, some sort of protection and stamp duties against foreigners have been introduced. Some of these investors have chosen to take profit in these overseas destinations. What then to do with the money? Meanwhile, Singapore is looking good.” Indeed, there are initial signs that the residential property market in Singapore is bottoming out. In the primary market, developers sold 6,388 private homes in the first six months of this year – just 20 per cent shy of the 7,972 units they moved in the whole of last year.

Private home prices also appear to be close to their trough, with the 0.3 per cent fall in the official benchmark price index in Q2 being the smallest of the 15 quarters since the peak in Q3 2013.

There has also been a pick-up in collective sale activity. Four deals have been done this year – One Tree Hill Gardens, Goh & Goh Building, Rio Casa and Eunosville – for about S$1.5 billion. The latest to be put on the market is Villa D’Este condominium in Dalvey Road, for S$96 million. The en bloc sale of two more condominiums, Dunearn Court and Normanton Park, are in the pipeline.

As for the increase in foreign investors’ tax burdens, Australia in July introduced a capital-gains tax for foreigners, at 12.5 per cent for properties worth more than A$750,000. States such as New South Wales, Victoria and Queensland have also raised the stamp duty for foreign property buyers.

London has also in recent years imposed a capital-gains tax on foreigners, and raised the stamp duty for buy-to-let properties.

The change in investment sentiment in Singapore’s property market has caused other countries to sit up; in recent months, many have started to pump money into the sector.

Inbound investment data shows that in the first half of this year, the number of deals closed that involved foreign entities buying Singapore land or properties was 14, compared to 21 for the whole of last year.

Transactions in the first half of this year were worth a total of S$5.5 billion, against S$8.9 billion in 2016.

Much of this capital came from China and Hong Kong (see chart), and went into purchases of development sites in particular. This drove up bids and prodded local developers into raising their stakes in their bids.

Many of these foreign bidders succeeded in clinching the sites. For instance, in May, Hong Kong-listed developer Logan Property, with Chinese conglomerate Nanshan Group, placed a S$1.003 billion bid for a housing site near Queenstown MRT station in Stirling Road.

Knight Frank’s Asia-Pacific research head Nicholas Holt said Chinese companies have been able to invest overseas despite the country’s curbs on capital outflows because they likely have overseas capital, either in foreign currency reserves or in offshore entities, including in Hong Kong.

Guanxi, or connections with the authorities, also helps big institutions to get approval for their investments more easily.