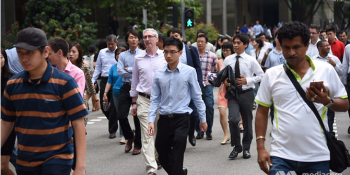 A total of 3,500 workers were retrenched in the April to June period, down from 4,000 in the previous quarter and 4,800 in the same period a year ago. The decrease was broad-based across industries, the ministry said.

The unemployment rate among Singaporeans fell from 3.5 per cent in March to 3.3 per cent in June, and from 3.2 per cent to 3.1 per cent among residents.

The overall unemployment rate remained at 2.2 per cent, unchanged from the previous quarter.

Total employment declined by 8,400, compared to a decrease of 9,400 in the first quarter. The fall in the second quarter was mainly due to a decrease in work permit holders in construction and marine, a result of low oil prices and continued weakness in the construction sector. Employment continued to grow for the services sector, MOM said.

The ministry also said the outlook for the labour market remains uneven across sectors.

“Hiring remains cautious in sectors such as construction and marine, but opportunities will continue to be available in finance and insurance, infocomms and media, healthcare, professional services and wholesale trade,” it said.