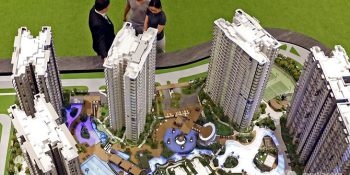 Commenting on the price declines, ERA’s key executive officer Eugene Lim said: “Overall in H1 2017, prices have only decreased marginally by 0.4 per cent. This is much better than the 1.1 per cent price decrease seen in H1 2016. It looks increasingly certain that the market is nearing its turning point.”

He said that as economic growth remains on track for the 2 to 3 per cent forecast for 2017, and with the Monetary Authority of Singapore recently saying that cooling measures will remain, he expects prices to move “sideways”.

Rentals of private residential properties also fell 0.2 per cent, after declining 0.9 per cent in the previous quarter, URA said.

Rentals of non-landed properties in CCR increased by 0.1 per cent, while those in RCR decreased by 0.4 per cent. Rentals in OCR also fell 0.6 per cent.

Developers did not launch any ECs in the second quarter but sold 954 EC units over the period, compared with the 1,024 units launched and 1,072 units sold in the previous quarter.

There were 35,423 uncompleted private homes – excluding ECs – in the pipeline, compared with 36,942 in the previous quarter. Taking into account ECs, there were a total of 43,202 units in the pipeline. In total, 17,827 units units were unsold as of the end of the second quarter.