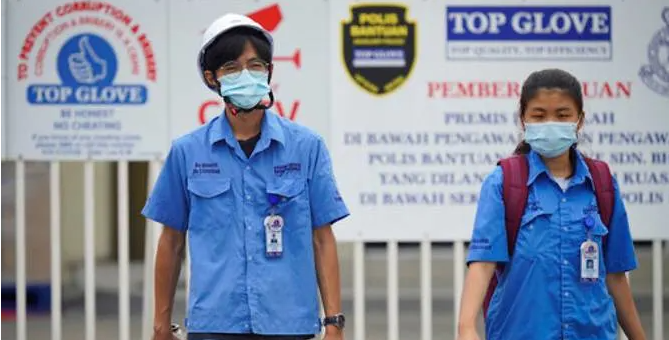 “The main offence was that the employers failed to apply for accommodation certification from the Labour Department under Section 24D of the Workers’ Minimum Standards of Housing and Amenities Act 1990,” JTKSM director-general Asri Ab Rahman said on Tuesday (Dec 1).

This had led to other offences including congested accommodations and dormitories, which were uncomfortable and poorly ventilated, he added.

In addition, the buildings used to accommodate the workers did not comply with local authorities’ by-laws.

“JTKSM will take the next step to refer the investigation papers already opened, to the Deputy Public Prosecutor so that all these offences can be investigated under the Act,” Mr Asri said.

Each violation under the Act carries a RM50,000 fine as well as potential jail time, he added.

The enforcement operations were carried out on Top Gloves’ worker dormitories in Kedah, Perak, Kelantan, Negeri Sembilan and Johor after the discovery of a COVID-19 cluster at a Top Glove worker dormitory in Meru, Klang on Nov 7.

As of Nov 30, the cluster has 4,278 cases while the national tally stood at 65,697.
The manufacturer had to shut down its factories in stages to conduct COVID-19 screenings, while the enhanced movement control order imposed on the worker dormitory has been extended until Dec 14.

Previously, Top Glove had come under criticism from human rights groups for, among others, debt bondage caused by heavy recruitment fees and withholding workers’ passports.

In 2018, the Thomson Reuters Foundation revealed that foreign workers had to work long hours to earn overtime pay, in some cases exceeding the legal limit of extra hours.

In July this year, the United States’ Customs and Border Protection issued a ban on imports from two Top Glove subsidiaries over forced labour concerns, despite the spike in worldwide demand for medical gloves due to the COVID-19 outbreak.

On Oct 6, Top Glove stated it would remediate RM136 million (US$32.77 million) to its migrant workers for recruitment fees over the next 10 months, with two remediation payments already made in August and September.