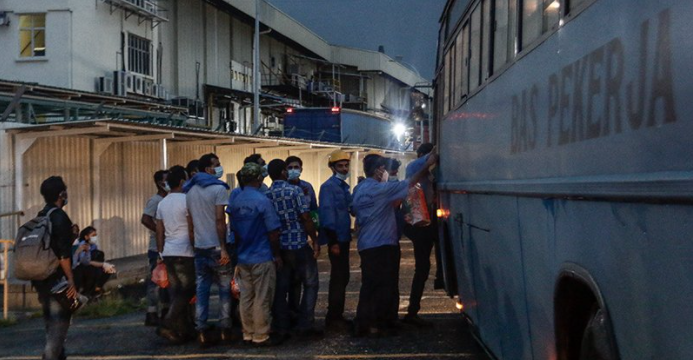 PETALING JAYA: A company has allegedly left at least one of its factories in Selangor open despite a rise in Covid-19 cases linked to its workers.

At about 7pm yesterday, FMT spotted dozens of workers leaving one of the company’s factories before getting into several buses. This was shortly after another bus was seen dropping off workers outside the same factory’s gates.

The company is said to be suspending operations at the factories to allow its workers to undergo screenings and mandatory quarantine in a bid to stem the spread of the virus.

FMT spoke to several of the workers mingling outside the factories, with two of them saying they worked at two separate factories.

When pressed, these workers said the factories were “not operational” but they did not want to disclose why they were entering and leaving the premises.

One worker, who was not among those at the factories, said his colleagues told the media the lines were closed but “inside (they are) all running”.

“What do you think they (workers) are there for? To watch the factory?” he asked.

Another source told FMT that though the company said its factories were closed, “they are running some lines in some factories”. He also alleged that four factories were running two shifts, going on to provide the factories’ names.

The source also told FMT that many of the workers were under quarantine at a hotel but had been told to return to work.

“They will need to redo the test 14 days later. So, if these workers who tested negative initially are found to be positive in a second test, they would have further spread (Covid-19) to other workers,” the source added.