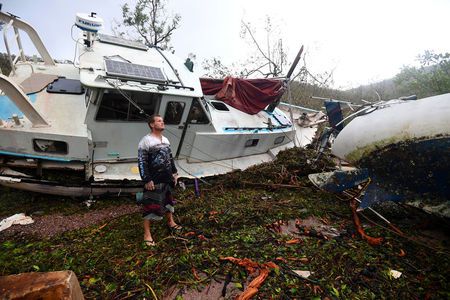 Tens of thousands more people on the mainland remained without power and many regions were cut off by flooding as officials warned that more heavy rainfall was on the way.

Cyclone Debbie struck on Tuesday, smashing tourist resorts, flattening canefields and shutting down coal mines in Queensland state as a category four storm, one rung below the most dangerous wind speed level.

The storm, now downgraded to a tropical low, continued to track over Queensland’s central interior in a southeasterly direction on Thursday, slowing attempts by the army and emergency workers to start what is expected to be a lengthy clean-up operation.

Prime Minister Malcolm Turnbull is due to tour the region later on Thursday with tourism and agriculture expected to take a major hit from the storm.

Resorts along the world-famous Great Barrier Reef and coastal areas bore the brunt of the storm with wind gusts stronger than 260 kph (160 mph). The naval ship HMAS Choules was on its way up to the Whitsunday Islands with food supplies and special equipment to begin repairing and rebuilding infrastructure.

Hundreds of hectares of sugarcane crops had been flattened and Wilmar said its sugar mills were stilled at Proserpine and Sarina.

One woman, a tourist, died on Monday in a car crash that police said was due to wild weather on Debbie’s approach. Another two people were injured as the storm passed through.