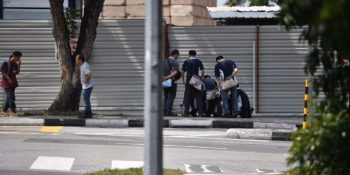 SINGAPORE – A chemical leak at a building in Kallang injured 11 people and prompted the Singapore Civil Defence Force to dispatch its Hazardous Materials (HazMat) officers to the scene, where the leak was contained within a sealed production room.

The incident occurred at a wafer production firm, RF360 Singapore, at 166 Kallang Way.

SCDF first said in a Facebook post at 2.11pm that it was alerted to the incident and deployed its resources there.

It said in an update at 3.47pm that it was alerted to the incident around 1.40pm and dispatched two fire engines, a fire bike, three support vehicles and two ambulances to the scene. Eleven workers were taken to Tan Tock Seng Hospital in a conscious and stable condition. ST understands the affected workers said they suffered from skin irritation.

The leak had been shut off before SCDF arrived by the built-in safety system at the premises.

SCDF said its HazMat detectors showed “no reading of the chemical vapour in the production room”.

“The surrounding environment is also safe with no traces of the chemical in the air,” it said.

The police said in a Facebook post at 2.21pm that they were alerted to the incident and police resources are also at the scene.

When ST was at the scene around 3.15pm, SCDF officers were seen removing boxes from the premises. When asked, a spokesman said they contained chemical protection suits for officers.

SCDF officers were seen removing boxes from the premises

A 38-year-old engineer who declined to be identified told ST that the gas alarm was triggered due to a leak that happened on the third floor of the building.

“I was working on the second floor, and it happened in the clean room of a production area,” he said, adding that he could not smell anything.

He also said: “We were not worried, because we have had evacuation drills.”

Around 3.30pm, a girl was seen being escorted into an ambulance.

Another staff member, who declined to be identified, said the announcement for evacuation was made around 12.30pm.

SCDF said in its Facebook post that StarHub mobile subscribers within the immediate vicinity of the incident would have received an advisory message urging members of public to stay away from the area.