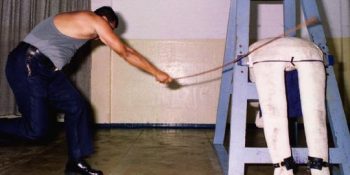 Adri Anton Kalangie was sentenced to 25 years’ jail and 15 strokes of the cane after he pleaded guilty to importing not less than 249.99g of methamphetamine on Monday, July 17 2017

SINGAPORE – A 42-year-old Indonesian drug mule who swallowed 29 pellets of methamphetamine, inserted 10 pellets into his rectum and hid four pellets in his shorts and shoe, took a flight from China to Singapore, intending to transit to Indonesia on the same day.

But at Changi Airport, Adri Anton Kalangie missed his connecting Singapore Airlines flight and ended up spending two days in the transit hall at Terminal 2.

A customer service officer, who was concerned that Adri was smoking and appeared to be drunk, approached him and found out he had missed his flight. But Adri began crying and apologising repeatedly.

The officer then escorted him to the transit counter for airport staff to issue him a new ticket at no cost. But on the way to the departure gate, Adri continued crying and apologising profusely, and eventually admitted that he was in possession of drugs.

He was originally charged with importing a capital amount of 275.44g but the charge was reduced to a non-capital one after written representations from his lawyers under the Legal Assistance Scheme for Capital Offences.

Adri’s lawyer, Mr Eugene Thuraisingam, said in his mitigation plea that the Indonesian had missed his flight as he was not feeling well and began hallucinating, which he believed was the result of the drugs in his system.

An X-ray conducted after Adri’s arrest showed 39 pellets inside his colon, although no obvious rupture or leakage could be seen.

Adri has been a drug mule since 2013, after a Nigerian named Frank, who headed a syndicate that delivered drugs from China to Indonesia, promised him 10 million rupiah (S$1,030) per delivery, the High Court heard.

Adri’s modus operandi was to collect the drugs in Guangzhou and ingest the drug pellets or insert them into his rectum. He stopped over either in Hong Kong or Singapore before delivering the drugs in Jakarta. Before his arrest, he had made six successful deliveries.

On March 20, he received 43 pellets of Ice in his hotel room in Guangzhou and hid them in the usual manner. He was promised 16 million rupiah for the delivery.

He departed Guangzhou at 1.30am on March 21 but missed his connecting flight, which was scheduled to depart Singapore at 6.20am.

At about 5.30am on March 23, customer service officer Herdyka Hamka Md Horip approached Adri to tell him not to smoke in the hall.

When Mr Herdyka asked Adri if he was drunk, the Indonesian claimed a child had bought drinks for him. But the officer replied that a child would not be allowed to do so in Singapore. Adri then broke down and kept repeating in Bahasa Indonesia “I know I’m wrong”, “I am afraid to be beaten” and “Don’t beat me up”.

On Monday, asking for at least 27 years’ jail and 15 strokes of the cane, Deputy Public Prosecutor April Phang noted that an ordinary body cavity search would not have yielded the pellets.

This underscored the difficulties in the detection of ingested drug pellets and revealed the extreme and sophisticated methodology used by drug syndicates, she argued.

Pleading for the mandatory minimum of 20 years’ jail and 15 strokes of the cane, Mr Thuraisingam emphasised that the drugs were never meant for Singapore and that Adri had immediately confessed and cooperated with the authorities.

The lawyer added that Adri was driven to be a drug mule by financial circumstances and ran the risk of overdosing on the drug pellets.