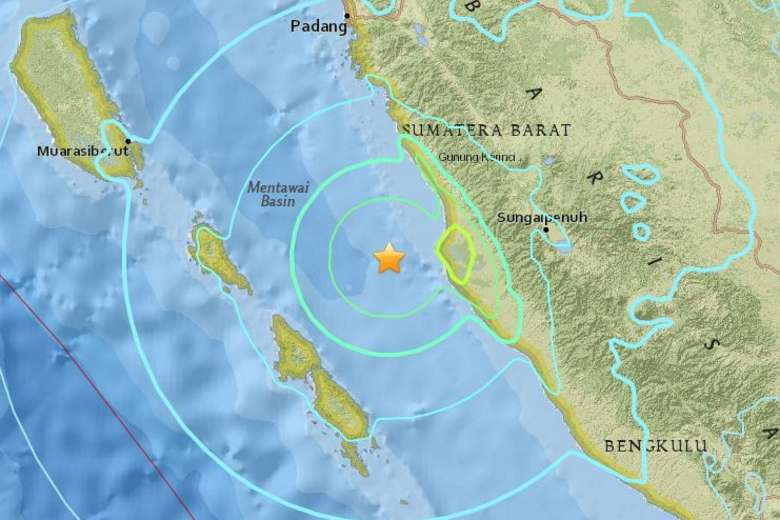 Tremors reported in parts of Singapore as magnitude 6.5 earthquake hits off Indonesia’s Sumatra.

JAKARTA/SINGAPORE – The Indonesian island of Sumatra was hit by a magnitude 6.5 earthquake with tremors felt in neighbouring Singapore just before sunrise on Thursday (June 2).

Indonesia’s Meteorological, Climatological and Geophysical Agency (BMKG) said the quake struck at about 5.56am local time, but preliminary assessment by the country’s National Disaster Management Agency (BNPB) also indicated that a tsunami was unlikely.

Local authorities, however, reported two injured and damages to nine buildings in West Sumatra but tele-communication links and electricity supply were not affected, said Dr Sutopo Purwo Nugroho, head of data and information at the BNPB.

Dr Sutopo said the epicentre of the quake was detected at a depth of 72km and about 79km off the coast of West Sumatra with other areas on the Indonesian island, including Bengkulu province, experiencing strong to moderate shocks.

“Very hard tremors were felt by people in the south coastal district and Muko-Muko (in Bengkulu) for about 20 to 30 seconds. Beds and home appliances shifted out of position, people panicked and rushed out of the house,” he said.

Besides Bengkulu, other areas that felt the quake include Padang, the capital of West Sumatra province, where strong tremors were felt, as well as Jambi and Pekanbaru, among others.

In Singapore, residents across the island said they experienced tremors lasting for up to a minute.

Ms Jamilah Ismail, who lives on the 25th floor at Marine Crescent, said: “I was reading the newspapers when I felt giddy, and then noticed that my bedroom door which was ajar was rattling.