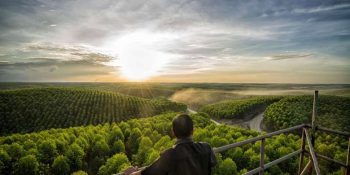 In the second of a four-part series on Indonesia’s haze fight, we discover how a new generation of firefighters spot and tackle the hazard

PEKANBARU: Mr Roganda Manalo has had many brushes with death in his 20 years of fighting fires.

But the 45-year-old fire marshall, who is part of Asia Pulp & Paper’s (APP) firefighting team in Indonesia, remains undaunted.

“It’s a noble profession,” he says. “I can help guard others from the threat of burning forests and land.”

His worst experience to date was in 2013, when he and his team had to simultaneously battle three fires using outmoded equipment and techniques.

During the huge fires in 2015 too, his crew of 70 firefighters in the Minas district, in Indonesia’s Riau province, continuously worked in 12-hour shifts for two days to extinguish the fires. The thick smog caused dizziness and nausea, and some of his teammates even fell sick.

Many children stopped going to school because of the haze. “It was my duty to help them,” he says.

The former public relations professional, who switched careers to fulfil his dream of saving lives, says his wife understands the risks his job entails, but fears he may not come home one day.

Mr Roganda, who has a 15-year-old son, and two daughters, aged 12 and 11, says: “Even though I have to sacrifice my time with my family, my priority is saving lives.”

That abiding sense of duty has driven him to upgrade his skills over the years. He even underwent three months of training to become a better crew leader.

During those sessions, he was taught how to manage his crew and communicate with them more effectively. He also learnt how to analyse a fire and quickly determine its severity.

Today, he leads two crews of 15 firefighters in the Minas district.

When activated, he briefs his men about the situation, alerting them to dangers that are specific to the fire they will be fighting. He also oversees operations on the ground, and is the main point of contact with the fire command centre.

While his men battle flames, Mr Roganda watches their backs, alerting them to changes in wind direction and the threat of falling trees. He also oversees logistics, including their levels of drinking water and fuel.

Once the fire is extinguished, the team does a final check to ensure all flames have been put out and conducts an equipment count. Mr Rogando ensures all personnel are accounted for before the team returns to base.

Besides fighting fires, crew members patrol allocated areas on foot and motorcycles, and in trucks, and head up fire-spotting towers to look for signs of fires. They also conduct regular fire drills and training on how to operate equipment.

Mr Rogando never wants to see a repeat of the devastating forest fires of 2015, when huge swathes of peatland were set alight due to the illegal slash-and-burn land clearing practices of small-time farmers. The fires were further exacerbated by that year’s dry El Nino season.

Much has changed since then. Not only have there been no fires in the district since last year, a new generation of firefighters has been groomed to deal with the rigours of keeping things that way.

Mr Rogando and his team specialise in peatland fires. These spread quicker than normal ones, given the high flammability of peat, and can occur both above and below the ground.

They can take over a month to put out, and have the potential to spread over a hectare — roughly the area of a track field.

Firefighters may feel dizzy and nauseous from smoke inhalation while on the job, and contract respiratory illnesses which last long after the last embers die out.

In the past, locating the fires took hours as the firefighters could only alert the central command team to a fire at the nearest observation post or village with phone reception. The lack of technology meant the men were not told the exact coordinates of the fire.

Now, potential fire spots are identified and attacked in a matter of about 30 minutes, thanks to better transport and equipment.

The expense has been immense.

The 48-year-old oversees all processes from a fire manage- ment situation room in a build- ing within APP’s Perawang compound. His team tracks temperatures at different locations, wind direction and potential fire spots, among other things.

Four mounted screens in the room display various information such as geographical maps of the area. The dizzying statistics do not faze Mr Priyanto in the slightest, and he can explain each component in detail.

“We take fires very seriously,” he says. “With equipment such as satellites, CCTVs, thermal imaging cameras and drones, we are ready for any potential hazards.”

APP’s impressive firefighting arsenal includes a fleet of speed- boats, firetrucks, helicopters and motorcycles, as well as satellites  and drones to aid the firefighters  in navigating the Perawang forests.

A point of pride for APP is its on-going trial of 149 cutting-edge mini satellites. These can obtain high-resolution images of areas as small as a dining table — a first for any pulp and paper plantation.

The satellites can pinpoint exact locations of fires in APP’s 2.6 million ha  of land and will drastically reduce time taken for firefighters to locate them.

APP’s fire-fighting advancements have put the company  ahead of the curve — since 2015, the Indonesian National Board  for Disaster Management and other plantations have been getting their help to fight fires beyond their own domain.

When there are no fires to fight, Mr Roganda actively engages the community, telling locals about the dangers of fire and putting up signboards in high-risk areas.

He also monitors the community to make sure farmers do not engage in slash-and-burn activities.