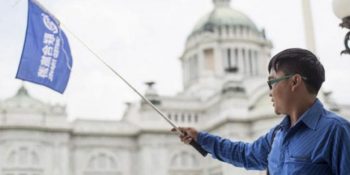 Thailand is the most welcoming country for Chinese travellers, overtaking Japan, South Korea and Hong Kong, according to the latest findings of booking website Hotels.com.

Hotels.com’s sixth annual Chinese International Travel Monitor (CITM) report said that despite many key indicators providing signs of a slowdown in the Chinese economy, this year’s findings have shown that spending on travel rose across all age brackets, with Chinese travellers spending an average of US$3,600 (121,000 baht) per person in the past 12 months — more than a quarter of their income, and up from 24% in the previous year. Chinese travellers are spending, on average, a whopping 28% of their income on international travel, with millennials born in the 1990s being the biggest spenders, allocating 35% of their income to travel in 2016.

According to the report, Chinese travellers of all age groups travel more frequently and for longer periods, with the average number of trips rising from three to four trips a year, and the number of days a trip in the past year increasing from five days to seven days. Chinese travellers are also visiting multiple cities per trip.

The average amount spent per day also increased — up 8% from 2016 — with dining, sightseeing and rest and relaxation activities proving most popular. Shopping, however, took a 35% dive from last year, indicating the increasing sophistication of Chinese travel preferences.

“Free and easy” arrangements seem to be the preferred travel style among Chinese tourists. CITM predicts the number of organised tour groups booked by Chinese tourists will drop as Chinese travellers spend more time (an average of 12 days) to research online.

Mobile applications are overwhelmingly the most popular way to book. Interestingly, older groups, comprising travellers in their 60s and 70s, indicated a desire to backpack in the future, increasing by 15% and 21%, respectively.