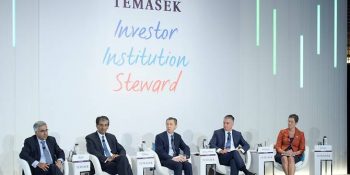 The Singapore-based investment company posted a one-year Total Shareholder Return of 13.4 per cent for the year, reversing from the 9 per cent decline the year before.

In a statement, Temasek said it continued to reshape its portfolio during the year, while adopting a measured and disciplined investment pace.

As and when opportunities arise, Temasek said it “capitalises on rich market valuations to exit some of (its) holdings”, while maintaining the flexibility to “re-enter when valuations are corrected”.

Over a longer term 10-year period, annualised Total Shareholder Return was 4 per cent.

During the financial year, Temasek invested S$16 billion and divested S$18 billion of its portfolio, resulting in a net divestment position for the first time since the March 2009 year.

Speaking at a media briefing, Temasek president and joint head of investment proup, portfolio management group, and Singapore, Chia Song Hwee, said: “Given the market environment, and high valuation, we see less investment opportunity because we find that, generally speaking, the market pricing is a bit too high.”

“But on the flip side, it allowed us to exit some of our positions or sell part of our stake given the valuation may be close to our intrinsic value.”

Investments in these new focus areas made up 24 per cent of its portfolio last year, up from 8 per cent six years ago, and delivered better returns than its average return from the overall portfolio.

The main sectors for its investments during the year were telecommunications, media & technology, transportation & industrials, and life sciences & agribusiness.

Key investments in Singapore during the year included an increased stake in Singtel, and acquisition of all minority shares of SMRT.

Main divestments included positions in Synchrony Financial, Bharti Airtel, Lafarge Holcim and Evonik Industries. It also exited some holdings via acquisitions by third parties, including divestments of its stakes in Neptune Orient Lines and B/E Aerospace.

Looking ahead, Temasek said it had a “constructive outlook” on the global economy, but cautioned of political risks and stretched public market valuations in the medium term.

Temasek’s head of strategy and senior managing director of portfolio strategy and risk group, Michael Buchanan, said the investment firm was “cautiously confident that various key economies will weather their medium term challenges”, despite some geopolitical risks on the horizon.

Since its inception in 1974, Temasek’s compounded annualised Total Shareholder Return is 15 per cent in Singapore dollar terms.