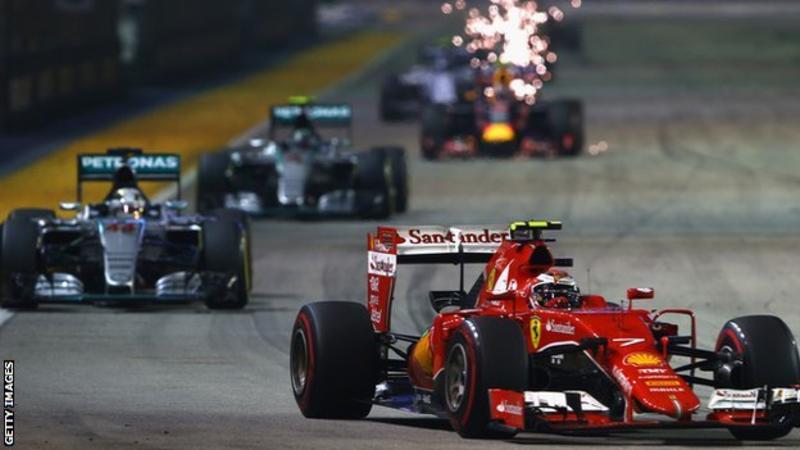 Triple world champion Lewis Hamilton expects the challenge from Red Bull and Ferrari to make it a tough weekend for Mercedes at the Singapore Grand Prix.

Mercedes struggled in the same race last year but dominated the rest of the season – just as they are doing now.

They believe they know why they underperformed but are still expecting one of the closest races of the year.

“It’s not going to be an easy-breezy drive,” said Hamilton. “Even when we won in 2014 it wasn’t straightforward.”

The Briton heads into the weekend with a two-point lead over Nico Rosberg, who won the last race in Italy.

After the first four races, he was 43 points adrift of his German team-mate.

“Monza didn’t quite go to plan,” said Hamilton, who battled back to second after dropping to sixth on the first lap.

“But when you look at how far we’ve come as a team this season, from the position we were in, then I realise I’m in a phenomenal position.”

Red Bull expect Singapore to be their best chance of a victory since Monaco,where Daniel Ricciardo lost out on the win because of a slow pit-stop.

They claim the characteristics of the Singapore track, which has 23 corners and few long straights, diminish the influence of the Mercedes engine, which has a power advantage over Red Bull’s Renault

But Mercedes say the performance comparisons between the two teams are also influenced by the fact that Red Bull run their car with an aerodynamic philosophy that increases drag.

Mercedes F1 boss Toto Wolff made a thinly veiled dig at Red Bull on this subject after Monza.

“Our car is the best compromise,” said the Austrian.

“We have 21 races throughout the season and we have to have a chassis-engine combination that works well in average.

“You have a team that is doing extremely well on circuits like Singapore with high downforce but they are not competitive on a circuit like [Monza].

“Then you can play the blame game and say the engine is not good enough, but if your car is draggy and has a rake like you are doing a handstand, then you cannot expect to go fast on the straights.

“It is about finding the best compromise. Let’s see what happens in Singapore.”