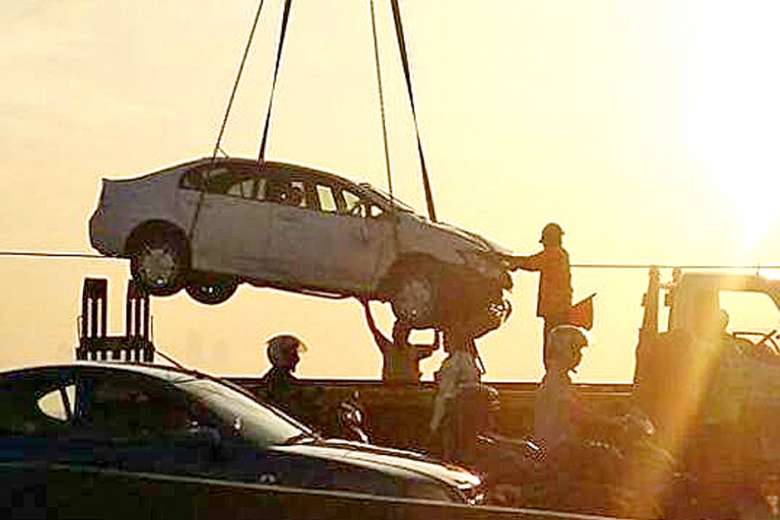 SINGAPORE – A Singapore-registered car crashed onto the railway tracks on the Causeway on Monday (June 6) morning, causing delays to the train service.

The accident happened at 4.40am. “The 39-year-old male Singaporean driver is currently assisting the Malaysian authorities in their investigation,” said Singapore’s Immigration and Checkpoints Authority (ICA), in response to queries.

The Straits Times understands that the accident happened across the border in Malaysia. The car was on its way to Singapore from the Malaysian checkpoint. Pictures posted on Facebook show the badly-damaged car on its side, leaning on the waterpipes on the Causeway.A PUB spokesman said there was no damage to the waterpipes. ” This incident has no impact on water transmission to Singapore,” the spokesman told The Straits Times.

It is understood that the driver was trapped as his car door was pinned to the ground. Several people attempted to free him by moving the car to make room for him to exit, Shin Min said.

The accident caused train service between Singapore and Malaysia to be disrupted for about an hour.

The first train leaving Woodlands at 5.30am was delayed till 6.30am. It was carrying about 320 passengers, Woodlands train station staff told Shin Min.

Malaysian train operator Keretapi Tanah Melayu (KTM) said its staff found a car abandoned on the tracks in the morning, some time between 4.30am and 5am. The car was without a driver.

The track was cleared by 6.30am, but the incident caused two train services to be cancelled, KTM said.

KTM said it has filed a police report and the police are investigating.