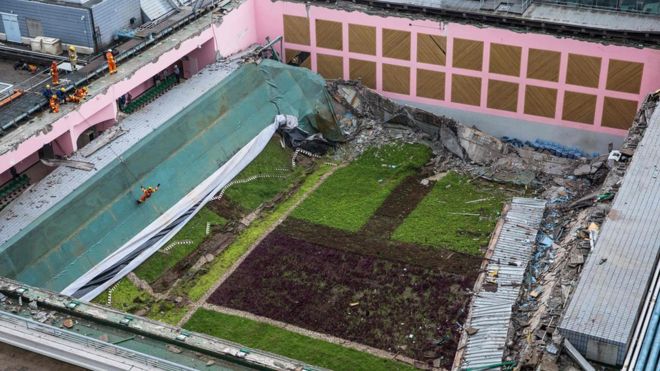 The roof of a sports hall at a university in Hong Kong collapsed on Friday, injuring three people.

Eyewitnesses say the collapse, which occurred above the hall’s badminton facilities, sounded like an explosion.

Such accidents are unusual in Hong Kong, where safety standards are generally high.

Venkat Saraenji, a student at the university, told the South China Morning Post the collapse had been “quite loud” and could be heard for “20 seconds”.

“Someone ran out of it and screamed, ‘explosion, explosion’,” he said. “The exam season was over, otherwise it would have been full of students…”

Two men and a woman were taken to hospital, a police spokeswoman told the BBC.

In a statement, the university said: “To the best of our knowledge at this time, no other persons were trapped inside the hall and the prime focus now is to ensure that the facility is safe.”

Police are investigating the incident.