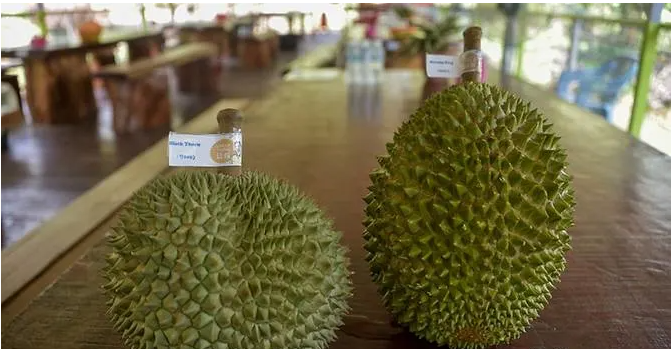 KUALA LUMPUR: Durian farmers in Raub, who are currently embroiled in a land dispute with a state-backed consortium, could make a handsome profit based on its proposed purchase price of RM30 per kg for Grade A Musang King, the company said on Wednesday (Sep 2).

In a statement in response to claims by farmers that they have been shortchanged by the company’s legalisation scheme, Royal Pahang Durian Resources PKPP Sdn Bhd (RPDR-PKPP) said the price is “fair”.

“Assuming a farmer with 10-acre land, his minimum gross revenue based on 2,000kg per acre Grade A Musang King is expected to hit RM600,000.

“Based on independent verification, cost of production of about RM8 per kg will therefore assure the farmers an expected margin of more than 200 per cent,” it said.

RPDR-PKPP was mandated by the Pahang state government to carry out its legalisation scheme proposal to address the issue of illegal farming in Raub and to curb further encroachment on state land for the cultivation of durians.

The state contends that the durian farmers have been planting without a permit, and that a contract is one way to legalise their operations.

The scheme has sparked a bitter land dispute between the farmers and the state. It spells out that the farmers had illegally occupied some 7,000 acres of land that is owned by the state.

As part of the legalisation scheme, the Royal Pahang Durian Group signed an agreement with PKPP in March for its entry into large-scale durian production.

The agreement stipulates that the Pahang state government had leased the farmed land to RPDR-PKPP for 30 plus 30 years, with the RPDR-PKPP then subleasing the land to the existing durian farmers. The farmers are required to sell the durians produced at a predetermined price to Royal Pahang Durian.

The durian farmers are now asking the courts to review their eviction from the farms where they have been cultivating durians. The hearing for the farmers’ bid for judicial review is set for Oct 28.

Dubbed as the Musang King hub of Malaysia, Raub is blessed with the right conditions to grow the durian variant that is popular in mainland China, Hong Kong, Macau and Singapore.

The Musang King – or Mao Shan Wang – is sought after for its creamy texture and sweet flavour with a hint of bitterness.

In its Wednesday statement, the consortium also refuted claims all durian farmers are against the legalisation scheme.

“To date about 300 farmers have registered with RPD-PKPP, 133 of which have confirmed and partially paid earnest money of RM1,000 per acre,” the company said.

The consortium added that there will be no financial penalties for farmers who do not meet the tonnage targets.

Some affected farmers who are protesting against the consortium, have organised themselves into a group dubbed Save Musang King Alliance (SAMKA).

In a statement which was also released on Wednesday, SAMKA said it “has always been firm” in its stance to share their profits with the state government for “the greater good”.

“This is clearly reflected from the fact that the farmers had been applying for titles or farming licences for decades in the hope that they can pay taxes to the government. Unfortunately, the farmers’ good faith was to no avail as the government had always shut the door on the farmers, thus causing the ‘losses’ as claimed by the state government now,” the statement said.

It added that farmers are still ready to work with the state government, on condition that private firm Royal Pahang Durian’s involvement in the issue is halted.

Both farmers and the state government would be in a “lose-lose situation” if this private corporation monopolises the entire durian market, it added.