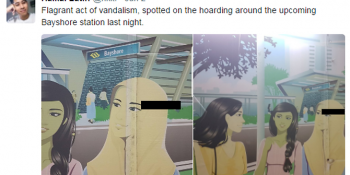 SINGAPORE: Police are investigating an apparent act of vandalism after the word “terrorist” was found scrawled over an image of a woman wearing a hijab on the hoarding at the upcoming Marine Parade MRT station.

Undergraduate Haikal Latiff, 26, tweeted about the vandalism and told Channel NewsAsia that he spotted the offensive graffiti on Thursday (Jun 1) at about 10pm while walking past Parc Seabreeze condominium along Joo Chiat Road. That is where the Marine Parade MRT station is under construction for the upcoming Thomson-East Coast MRT line, and not the Bayshore station as he initially tweeted.

“I was kind of shocked that … a cartoon would invite a remark like that,” he said. “It made me think about how Islamophobia is taking shape, even in Singapore. We hear about it in news stories about foreign countries, and it feels very far away. But when you witness something like that happening in Singapore, it really hits home.”

When contacted, the Land Transport Authority (LTA) confirmed that the contractor involved made a police report on Friday.
Read more at http://www.channelnewsasia.com/news/singapore/police-investigating-offensive-graffiti-at-upcoming-marine-8909786