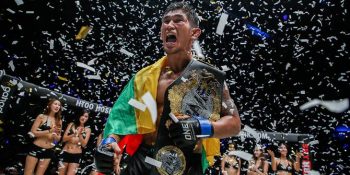 On June 30, willed on by a thunderous Yangon home crowd, the 32-year-old underdog stunned his undefeated opponent to capture the middleweight title belt of ONE Championship, Asia’s largest promotion.

While the historic feat cemented his status as arguably his country’s most famous athlete, it has also revived interest in his political views. It is a subject which quickly reverses N Sang’s otherwise genial mood and draws a deep, near-melancholic sigh audible over a phone call with Channel NewsAsia from his base in Maryland, US.

N Sang is a native of Kachin State, where civil war between local rebels and Myanmar’s army has raged since 2011, killing thousands and displacing some 150,000 civilians.

“It makes me sad. I’ve always been against the war. I’m not neutral,” he said.

“But I’m not going to condemn a political party because that would put me in a political stance. And I just don’t want to be a political figure. I’m not a politician. I’m just an athlete.”

“At the same time I hope I bring the people, the nation together. That’s not on my job description, but I understand the impact I’ve had on people in Myanmar, and it motivates me to work even harder.”