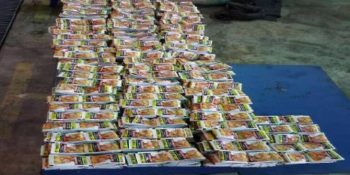 SINGAPORE: A 32-year-old Singaporean man was sentenced to four weeks’ jail on Thursday (Jul 20) for smuggling into Singapore chewing tobacco products with a street value of about S$9,200.

Kavinthiran is the first person to be convicted under changes to the Tobacco (Control of Advertisements and Sale) Act, which banned the import, distribution and sale of emerging tobacco products. The ban took effect on Aug 1 last year.

According to the Health Sciences Authority (HSA) in a news release, Kavinthiran had driven a rented car from Johor Bahru to Woodlands Checkpoint on Jan 3 when he was stopped by Immigration and Checkpoints Authority officers.

They found 4,585 sachets labelled as “Hans Chhap Tobacco” hidden in various parts of the car such as the side door panels. The sachets contained 55kg of khaini tobacco, which is among the types of emerging tobacco products banned in Singapore.

HSA said investigations revealed that Kavinthiran worked with an acquaintance in Malaysia to bring the banned chewing tobacco into Singapore, and would receive payment if the delivery was successful.

Anyone convicted of smuggling chewing tobacco products into Singapore faces a jail term of up to six months, a fine of up to S$10,000, or both. The penalties are double for repeat offenders.