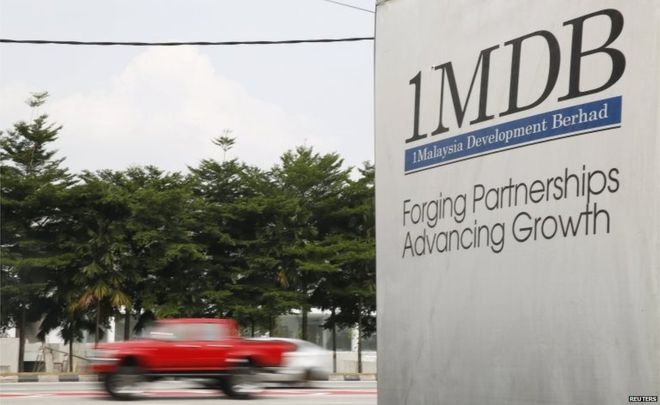 The US Justice Department is looking to seize more than $1bn (£761m) in assets as part of its investigation into Malaysia’s state fund 1MDB.

Lawsuits filed in Los Angeles by the Justice Department allege there was “an international conspiracy to launder funds misappropriated” from 1MDB.

The fund was set up in 2009 to turn Kuala Lumpur into a financial hub.

But, the lawsuits say, billions of dollars were instead fraudulently diverted from 1MDB.

It says “multiple individuals, including public officials and their associates” were responsible for diverting money between 2009 and 2013.

The stolen funds were used “to fund the co-conspirators’ lavish lifestyles, including purchases of artwork and jewelry, the acquisition of luxury real estate, the payment of gambling expenses, and the hiring of musicians and celebrities to attend parties,” the court papers say, Reuters reports.

The lawsuits do not name Prime Minister Najib Razak, who established the fund when he came into office.

But, Riza Aziz, his step-son and the producer of Leonardo DiCaprio film The Wolf of Wall Street, is named as a “relevant individual”, report media outlets who have seen the court papers.

Read More at the BBC  Malaysia’s ‘most investigated’ company

A Malaysian financier and two Abu Dhabi government officials are also among those named.

There has been no official reaction from Malaysia on the lawsuits.

The fund started to attract attention in early 2015 when it missed payments for the $11bn it owed to banks and bondholders.

The Wall Street Journal (WSJ) reported it had seen a paper trail that allegedly traces close to $700m from the troubled fund to Mr Najib’s personal bank accounts.

1MDB said in a statement last year that it has never given money to the prime minister and called the claims “unsubstantiated.” It has repeatedly stated that the company has assets worth more than its debts.

Mr Najib also denied taking money from 1MDB or any public funds, and his lawyers have demanded an explanation from the WSJ on its report.

Full details of the case are expected to be outlined by US Attorney General Loretta Lynch later on Wednesday.