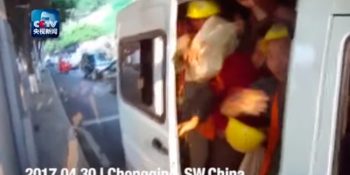 Crowded roads and subways are common for commuters in China. That is why the straddling bus generated so much publicity. Unfortunately, that turned out to be a Ponzi scheme. However, some determined and flexible commuters found another unbelievably weird way to go to work. Forty construction workers crammed into a six-seat van.

Late last month, police in southern China spotted a white van driving erratically. It wove in and out of its lane, almost causing multiple accidents. Before long, police in Chongqing pulled the vehicle over. Officers approached the driver and could not believe what they saw. There was a gigantic blob of humans in the van. There were so many people inside that they kept bumping into the driver. This contact caused the van to swerve down the road.

The situation became even more bizarre when the law enforcement officers ordered everyone inside the van to line up on the sidewalk. Realizing the uniqueness of the situation, officers recorded the rest of the traffic stop. In a scene worthy of a circus clown car, 40 people piled out of the small passenger vehicle. In total, there were 39 men and 1 woman inside the white van. Additionally, all 40 people wore identical yellow helmets and orange vests.

The passengers were all construction workers. Their destination was a building site on the other side of the city, near Chaotianmen Bridge. With the van empty, police saw there were no seats in the back of the vehicle. This allowed the people to get inside, but also limited the driver’s ability to operate the vehicle. Police impounded the van and issued the driver a ticket. The violation was for overloading a vehicle. The driver admitted that this was common practice for workers at the construction site. However, authorities said that this was the first time anyone had been pulled over for extreme carpooling.