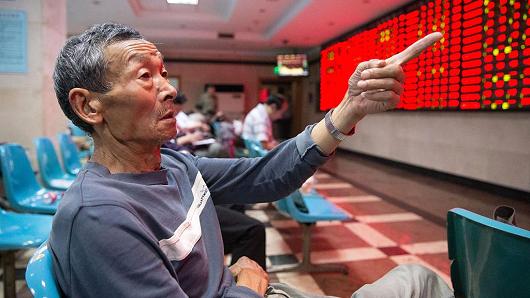 Chinese markets led gains in a mixed session for major Asian bourses on Wednesday, shrugging off a decision by stock index provider MSCI on Tuesday to delay inclusion of mainland-traded Chinese A shares in its key emerging market index.

Most other Asian markets also reversed morning losses, despite continued jitters over the possibility the U.K. may opt to exit theEuropean Union as well as concerns over the outcome of the Fedmeeting, due later, and the Bank of Japan’s meeting ending Thursday.

That contrasted with a stronger reaction in U.S. markets on Tuesday, where the Deutsche X-trackers Harvest CSI 300 China A-Shares ETF (ASHR) fell more than 2 percent in after-hours trade.

The MSCI’s decision on A-shares came after international institutional investors clearly indicated that they would like to see further improvements in accessibility to China’s market. MSCI said that it would monitor the implementation of the recently announced policy changes and will seek feedback from market participants. The Chinese stocks currently listed in MSCI’s emerging market index are traded in either Hong Kong or the U.S.

David Qu and Raymond Yeung from ANZ said the MSCI decision should have no direct influence on onshore equity markets. “China’s equity market is very domestic,” they said in a note on Wednesday.

“Even if the A-shares were partially (5 percent) included, the direct influence to onshore equity markets would be marginal in the near term, as it would trigger a total inflow of only $22 billion into China’s equity market over the course of one year,” Qu and Yeung said, adding the decision will likely have minimal impact on the yuan exchange rate and the Chinese bond market.

Some analysts expect the MSCI decision will impact the Chinese currency.

“Since the expectation of capital inflow due to the inclusion of A-shares into MSCI has gone, the expected capital inflow dissipates, the yuan (both onshore and offshore yuan) is set to depreciate beyond 6.6 today,” said Iris Pang, Natixis’ senior economist for Greater China. She added the uncertainty on Brexit makes “a double whammy on the currency.”

Before market open, the People’s Bank of China guided the yuan’s mid-point fix to 6.6001 against the dollar, its lowest levels since early 2011.

The on-shore dollar/yuan pair traded at 6.5925 as of 2:58 p.m. HK/SIN, compared with an intra-day high of 6.6043, while offshore yuan traded at 6.6058 to the dollar. China’s central bank lets the yuan spot rate rise or fall a maximum of 2 percent against the dollar, relative to the official fixing rate.

While the yuan is primarily traded on the mainland and subject to strict central bank supervision, its offshore counterpart is accessible to everyone.

The index is expected to receive a boost from Pakistan’s inclusion on Tuesdayinto the MSCI Emerging Markets (EM) Index, one of the world’s most popular emerging markets equity indexes, while mainland Chinese shares were left out.

Global markets have been on edge this week and the lingering uncertainty has seen investors scurry out of riskier assets to safer havens, such as bonds.

The yield on the 10-year Japanese government bonds fell to touch another record low at negative 0.187 percent on Wednesday.

On Tuesday morning London time, the yield on the 10-year benchmark German bund fell into negative territory for the first time; on Wednesday afternoon Asia time, the yield was very near zero at 0.0020 percent.

In the currency market, the dollar strengthened against a basket of currencies, with the dollar index trading at 94.798, compared with levels as low as 93.400 in the previous week. The Japanese yenweakened relatively against the greenback, trading at 106.25 as of 2:55 p.m. HK/SIN, compared with a earlier low of 105.91.

In company news, shares of Virgin Australia tumbled 11.86 percent to A$0.260, after the company said it plans to raise 852 million Australian dollars ($625 million) through an equity rights issue, which would bring its recent fund raising efforts to about A$1 billion. Under the rights issue, stock will be offered at A$0.21 a share, a sharp discount to Tuesday’s close at A$0.295.

-Evelyn Cheng contributed to this report.