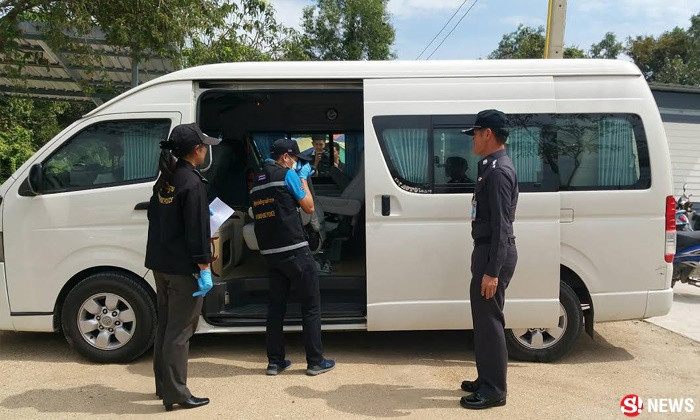 PATTAYA: — Police in Pattaya have interviewed the minivan driver who drove the two suspects in the murder of Tony Kenway to the resort from the Cambodian border

Lert Laimeun, 48, said the two men – Miles Dicken Turner, a Briton, and Abel Caldeira Bonito, a South African – paid him 2,500 baht a day to rent him and his van for seven days. He took them to Pattaya on the 19th and was given a further 500 baht a day to stay in a resort in Bang Lamung. He was told to stay on standby and not to go anywhere. The two men disappeared but kept in telephone contact every day. They told him after a few days that their business in Pattaya was not yet concluded.

They on the day of the shooting – Tuesday – he got a call from the suspects who said to take them back to Hat Lek on the border. On the way Miles shaved his beard off and asked to smoke cigarettes.

When they reached the border they gave him a 5,000 baht tip and crossed over to Cambodia.

Mr Tony Kenway was shot outside the Sanit Sports Club in Pong district on Tuesday as he sat in his red Porsche Cayenne. The suspects fled the scene on a motorcycle rented earlier and later dumped in Soi Pattaya Park. The South African was the shooter and the Briton drove the getaway motorcycle.

Police are still working on the theory that the men had a business conflict with the victim but are tight lipped about the exact nature of this for fear of damaging the case, They have contacted their counterparts in Cambodia in an effort to track down the suspects. Yesterday regional top brass inspected the site of the shooting and the Porsche before going into a crisis meeting to discuss the way forward in the case.

Mr Kenway, a father of four married to a Thai woman called Somporn, lived in the Pong area in one of four properties he owned in Thailand.

He had been living in the country around seven years.

He had been arrested in 2015 and charged with illegal work and hiring illegal workers, a case that was due to have its next hearing in February.