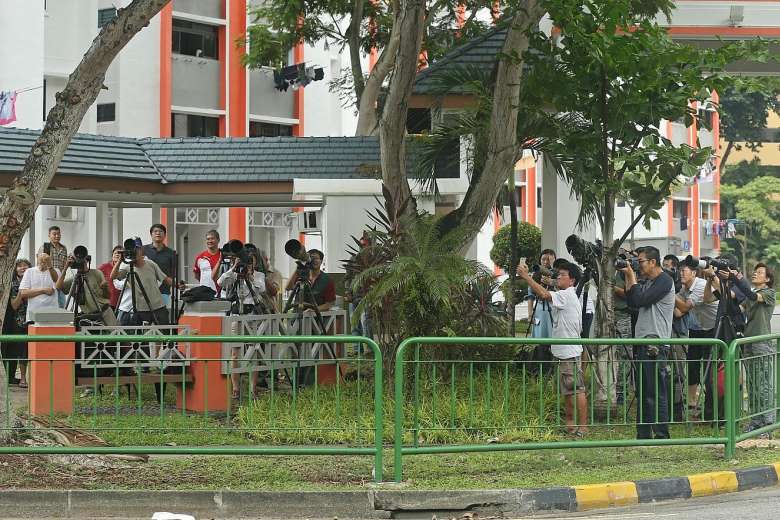 They look like a scrum of photographers covering a celebrity event or a football match.

Since last week, groups of about 20 photographers have spent hours staring at a hole in a tree opposite Pek Kio Market and Food Centre, all waiting to capture the rare sight of parrots and chicks in an urban environment.

As soon as one of the blue-crowned hanging parrots pops out, a flurry of shutter clicks can be heard, along with gasps of “oohs” and “ahs”.

Well-known nature guide Subaraj Rajathurai said the excitement near Block 51, Kent Road, is probably due to the rare location.

The wildlife consultant from Strix Wildlife Consultancy said parrots, which tend to live high in the canopy, cannot make their own holes to nest in, so they use those left by other birds, such as woodpeckers. But in this case, the parrots chose a hole that was around 5m above ground, which offers a good angle for shutterbugs, armed with long lenses that can cost thousands of dollars.

Mr Subaraj said: “When the bird is nesting, or raising its young, it regularly comes back to the same spot. Otherwise, as a woodland specialist, it tends to live in the tree canopy and its small size means it can be hard to see.”

But once the chicks are capable of leaving the nest, their parents will leave too. These chicks usually nest for about three weeks.

Some shutterbugs, like retiree Victor Tan, 58, waited nearly two hours before he was able to snap a picture of the parrots and one of the chicks yesterday.

The former IT professional first heard of them last week from one of his birdwatching WhatsApp groups, through which the news has spread quickly around the island.

Said Mr Tan: “It was very crowded when I got there in the morning. There were older retirees like me, young people and also office workers who took along their cameras during lunch hour.”

This not-so-secret spot has been the subject of chatter among birdwatching groups and shutterbugs since one unknown enthusiast spread the news.

These groups have become more popular of late, with Bica growing to nearly 13,000 members since the group’s creation in 2012.

Another hobbyist, who declined to be named, said he rushed to the spot last week after returning from overseas. “We can’t really see the chicks but the adults will return every hour or so to feed them,” he said. “It’s kind of interesting.”

Mr Subaraj said the photographers should be careful about disrupting the nest, such as going too close or attempting to feed the birds.

Noise from the rapidly firing camera shutters can also scare the parents away and cause the chicks to die, he warned.