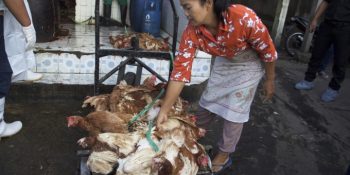 Vietnam’s agriculture ministry announced in late May that the country was free of the H5N1 virus after weeks of no new cases.

It’s not yet seven in the morning, but the slaughterhouses at the back of Terban market in Yogyakarta city are in full swing. Wholesalers, housewives and businessmen arrive on motorcycles, weaving their way through blood and feathers to pick up freshly killed chickens.

Officers from Indonesia’s Directorate General of Livestock and Animal Health Services, sporting masks, gloves and aprons with hair tucked under plastic caps, are on their weekly visit to take samples to test for avian influenza, known as bird flu.

As the largest poultry market in Yogyakarta on Indonesia’s Java island, selling 30,000 chickens and ducks each day, Terban is a hot spot for bird flu, which spreads through flocks via direct contact with infected birds.

Such markets, together with high population density, massive commercial poultry production and cultural practices such as backyard chicken-rearing, have also made Indonesia a global epicenter for human transmission of the H5N1 strain of bird flu.

Since 2003, this strain has infected 859 people and killed 453 in 16 countries, according to the World Health Organization (WHO). Egypt, Indonesia and Vietnam have borne the brunt, with Indonesia suffering the largest death toll, at 167 people.

Scarred by the lives and assets lost in the 2003 outbreak, Indonesia is now relying on local-level monitoring and testing to keep pandemics at bay, working with international agencies including the U.N. Food and Agriculture Organization (FAO).

The Southeast Asian country is “endemic” for the H5N1 virus, and outbreaks are still occurring, said James McGrane, team leader of the FAO’s Emergency Centre for Transboundary Animal Diseases in Indonesia.

The bird flu viruses are notoriously unstable, he added.

“They change all the time. So we need to ensure that we’re tracking the viruses in order that locally produced vaccines are protecting flocks,” he told the Thomson Reuters Foundation.

The H5N1 virus mostly affects birds, but experts fear it could mutate and spread rapidly between people, triggering a pandemic that could possibly kill millions.

The highly pathogenic virus jumped into humans in Hong Kong in 1997 and re-emerged in 2003-2004, spreading from Asia to Europe and Africa.

In Vietnam, the H5N1 virus has killed 65 people, one of the highest fatality rates in the world, according to WHO.

The virus had caused outbreaks in southern and central Vietnam this year, before the agriculture ministry in late May declared that all provinces and cities nationwide were free of the virus, the Vietnam News Agency reported. A locality is defined as free of bird flu if no new infection is detected within 21 days.

But Vietnam’s animal health officials have also warned about other strains such as H5N8 and H7N9, which could enter the country through the border, especially from China.

Indonesia has found no new human cases or fatalities since 2015, but there is no room for complacency, say poultry farmers and experts who witnessed the 2003 epidemic.

Robby Susanto’s chickens escaped unscathed but his neighbors – a mere four meters (13 ft) away – were not so lucky.

Susanto later found out his chickens were spared because he had used the right amount of disinfectant. Since then, he has received FAO training on keeping his farm clean and protected.

“As a farmer I can’t speak from a scientific point of view, but that feeling of fear and worry is still there,” he said.

He has now implemented measures used by Susanto, such as dividing the farm into zones according to bio-security risks, and enforcing strict access and hygiene standards in chicken enclosures.

“I used to have outbreaks every two or three years but after 2009, I started getting them every year,” he said. “Since implementing these steps, I haven’t had any outbreaks in 18 months.”

Twenty cases of H5N1 virus in poultry were detected between January and mid-May this year, said Sri Handayani Irianingsih, a virologist at the government’s Disease Investigation Centre (DIC) in Wates, where samples from Terban market are tested.

The number of cases usually goes up as the dry season shifts into the monsoon, she added.

Indonesia’s eight DICs use an online system to monitor different strains of influenza virus circulating in the country, and advise the government on appropriate strains to use for producing local poultry vaccines.

According to the FAO, nearly 20 percent of Indonesian households own livestock, including poultry.

This has given rise to concerns over antimicrobial resistance (AMR), caused by overuse and misuse of antibiotics, which are given to treat livestock more than for human health.

In Indonesia, most antibiotics for animals are supplied without veterinary prescription, noted Luuk Schoonman, chief technical advisor for the FAO’s avian influenza work in the country.

The World Bank calls AMR “a threat to the global economy”, warning it could cost the world up to 3.8 percent of annual gross domestic product by 2050.

By 2030, Indonesia will have increased its use of antimicrobial drugs by 200 percent as poultry production rises, said Schoonman.

In Indonesia, antibiotics are also used in aquaculture, putting it at high risk of AMR, as is the case in Thailand, Vietnam, Bangladesh, India and Chile.

Yet most countries are not well-prepared for disease pandemics and are failing to invest enough in preparedness, warned a World Bank report last month.

One key solution is to invest in community health workers. As local eyes and ears, they can facilitate early detection and response to outbreaks, said Tim Evans, the World Bank’s senior director for health, nutrition and population.

But not everyone is worried about the threat.

Tulus Riyadi Wardoyo, 60, has been a poultry trader since he was 16, and has never experienced or heard of bird flu cases in poultry or humans.

“Since I was a kid, my neighbors raised backyard chickens – I grew up with them. I’m immune,” he said.

“This is very good business. It’s where the money is,” he laughed, pointing at the chickens outside Terban’s abattoirs.