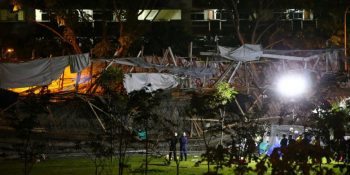 Rows of metal supports have been erected to support parts of an incomplete Upper Changi Road East viaduct after cracks were found during an investigation looking into the deadly collapse of a section last week.

The cracks were discovered at 11 locations on load-bearing corbels at the work site, said the Land Transport Authority (LTA) yesterday.

As a precautionary measure, the viaduct sections where the cracks were discovered have been further propped up, it added.

On Friday last week, two corbels – meant to bear the load of horizontal beams during construction – gave way, causing a segment of the uncompleted viaduct to collapse with 11 workers on it.

One died and 10 were injured. As of yesterday, six are still warded, LTA said. Work on the site has since stopped.

After the accident, a qualified person (QP) for design from the project company inspected the structural integrity of the remaining six spans of the viaduct at the site. The QP assessed that there would be no danger after the installation of extra propping to the beams adjacent to the collapsed span, according to the LTA.

Installation of the rows of metal supports started on the same day of the accident.

The project to design and build the viaduct was tendered to Or Kim Peow Contractors and its consultants, CPG Consultants, in 2015.

Since the accident, a multi-agency team comprising the LTA, the Building and Construction Authority and the Ministry of Manpower have been trying to determine what led to the collapse.

The site has been shut to facilitate recovery work and investigation. The cause and nature of these newly discovered cracks are still being studied.