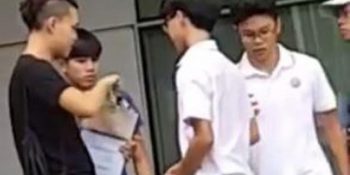 A still frame from a video posted on the Unscrambled.sg Facebook page shows men claiming to be police officers forcefully canvassing for donations at Punggol MRT station.

The police have arrested two youths for their suspected involvement in several cases of impersonating a public servant.

In a press release yesterday, they said they had received a report of a group of young men claiming to be police officers and engaging in aggressive tactics while seeking donations from the public last Thursday.

After further investigations, officers from the Ang Mo Kio Division established the identities of the group members, and the two suspects, aged 17 and 18, were arrested on Sunday. The police are also investigating the company the suspects were working at for possible breach of regulations under the House to House and Street Collections Act.

The New Paper understands that one of the suspects was part of the group of impersonators that TNP had reported on last Saturday. DEMANDED DONATIONS A student told TNP that the group of three men had surrounded her outside the entrance to Punggol MRT station, claiming to be from the Criminal Investigation Department and demanding donations.

The police said that anyone found guilty of an offence of impersonating a public servant can be jailed up to two years and fined. They also reminded the public to be vigilant and wary of people who may impersonate police officers to carry out criminal acts. When in doubt, the public should ask for the police officer’s warrant card to verify his identity before complying with any instructions.

A genuine warrant card will have identification features such as the police crest, the officer’s name, identity card number and photograph. The warrant card will also have the holographic word “POLICE” appearing below the officer’s photograph when the card is tilted at an angle. – See more at: http://news.asiaone.com/news/singapore/2-arrested-impersonating-police-officers#sthash.3H5jQa8S.dpuf