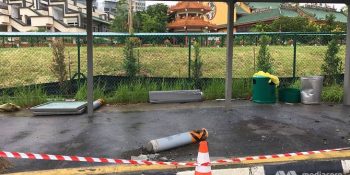 Authorities were alerted to the incident, which involved a minibus, at about 12pm and sent two fire engines, four ambulances and two support vehicles to the scene.

Channel NewsAsia understands that the bus, which was operating a regular shuttle service provided by Mount Alvernia Hospital, crashed into a bus stop.

An eyewitness who did not want to be named said the bus ended up “sitting on the pavement – taking up its full width – wedged under the broken rain shelter, facing the wrong direction”.

Out of the injured, nine were sent to Tan Tock Seng Hospital, two to Raffles Hospital and two to KK Women’s and Children’s Hospital for treatment, SCDF said.

Two of the injured are pregnant, Channel NewsAsia understands.