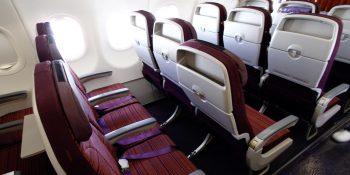 Seats dont look like this checkk out the pictures below,

A quick update. After a flight from Phnoen Penn to Bangkok passagers were left forced to stay on the plane while it filled up with smoke.

30 minutes passanagers they were forced to stay on the plane and breath in the gas comings out of the aircon ducts.

I was on the plane with a friend and for the past 2 days we cant stop coughing. Thai Smile and Thai Airways do not have a complaints department. So i wrote to them and they called me on the phone and said go to the doctors, which over the phone they say they would pay, However call me crazy but Ive asked 2 times for them to put it in writing and the refused. They are refusing to give any compensation for been gased on the plane. More to follow. Now if this is custiomer service. I would never fly Thia Airways again. Watch this space and Please share.